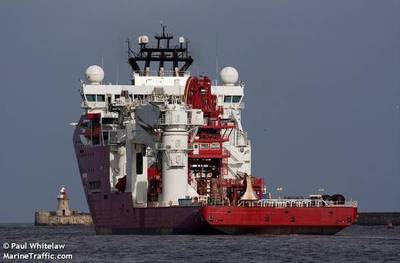 Norway-based offshore vessel owner DOF Subsea has secured a contract extension for the Skandi Acergy construction support vessel. It has also won a new contract in Trinidad and Tobago for the Skandi Constructor vessel.

For the Skandi Acergy, DOF said Friday that "a key renewables client" had awarded an extension to an ongoing subsea construction contract in the North Sea.

"In direct continuation of the ongoing project, Skandi Acergy shall be further utilized up to 169 vessel days," DOF Subsea said, without sharing the identity of the client. According to MarineTraffic data, the vessel was recently en route to the Neart na Gaoithe (NnG) offshore wind farm site, offshore Scotland.

According to DOF Subsea, the contract extension includes project management, engineering, and range of bespoke equipment and services tailored towards the renewables segment. The project will be delivered by an integrated DOF Subsea team located in Aberdeen,
Scotland.

This is the second contract announced for Skandi Acergy in less than a month. DOF said in December it had won a contract for the Skandi Acergy with oil and gas company Beach Energy for the Otway Offshore Phase 5 - transport and installation project in Australia. The contract scope includes project management, engineering, fabrication, transportation, and installation services and is expected to be completed in Q1 2023.

Also, DOF Subsea said Friday it had also won a contract for a project in Trinidad & Tobago for the vessel Skandi Constructor. The project will begin in early January with an estimated duration of approximately 40 days plus mobilization and demobilization.

The vessel is already in Trinidad after the completion of a light construction project. The company did not say who the client was, nor did it share financial details about any of the contracts announced.