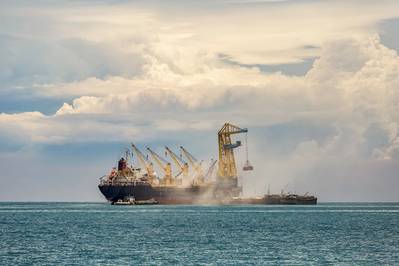 Demand drivers and freight rates
The dry bulk shipping industry continues to enjoy a bumper year, with average earnings continuing to outshine any profits made in the past couple of years. As is often the case, Capesizes’ are taking the spotlight, with recent earnings peaking above $50,000 per day. A much more consistent and stable increase is recorded for Handysize and Supramax ships. These saw average earnings rise to $33,087 and $36,832 per day, respectively, on September 3. On the same day, a Panamax ship could expect to earn $32,445 per day. 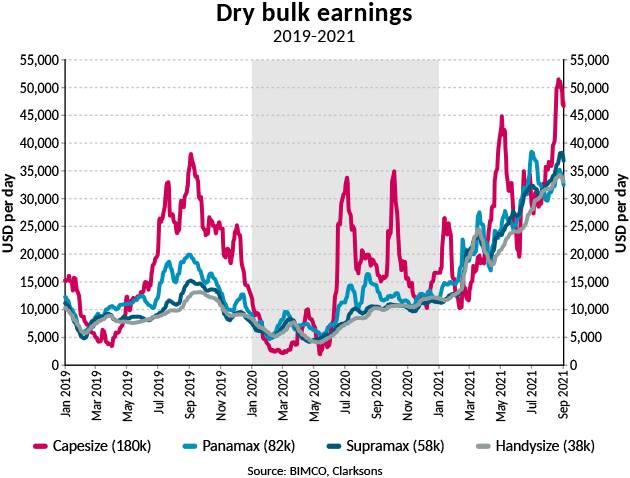 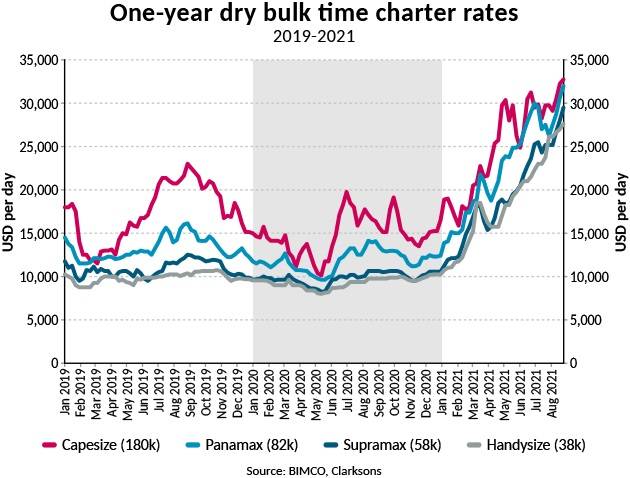 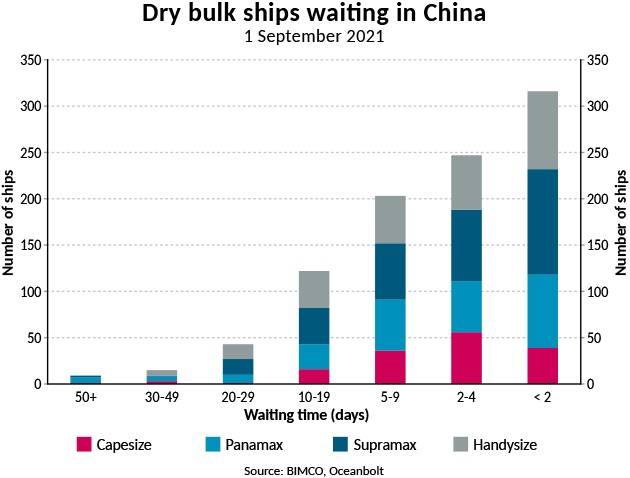 As an example of what this means for an individual trade, Oceanbolt data for ships sailing from Port Hedland, Western Australia, to Qingdao, China, shows that the average time for the journey (including waiting time at the load and discharge ports) has risen by 22.7%. In July 2021, it took an average of 33.5 days, while in July 2019 it could be completed in 27.3 days.

As well as congested ports, the recent pick-up in Brazilian iron ore cargoes to China has helped lift the Capesize market. In August, 21 iron ore cargoes were offered on the spot market, compared to 11 in July and the highest weekly number of cargoes since April (source: Commodore). During the first seven months of the year, Brazil exported 198.8 million tonnes of iron ore, a 10.8% increase from last year and up 1% from 2019. However, it remains 15 million tonnes lower than the record-high exports of 213.7 million tonnes that were recorded in the first seven months of 2018.

65% of Brazilian iron ore exports during the year to date have gone to China, with volumes on this trade growing by 6.2% over this period. Here, volumes of iron ore have grown compared to 2018, as China has taken a larger share of the total. This is clearly good news for dry bulk demand; the larger the share heading to China, the higher the tonne mile due to the long distance.

U.S. coarse grains exports have seen the highest growth, up 19.2 million tonnes (+67.1%) in the first seven months of the year compared to the same period in 2020. These additional volumes are the equivalent of an extra 257 Panamax loads (75,000 tonnes). Just behind in terms of volume growth are U.S. soy bean exports, which have had a strong off-season, with exports in the first six months amounting to 17.8 million tonnes, a 7.8% increase from last year.

The new U.S. marketing year began in September, and exports of soy beans will once more begin to increase. Compared to the start of the 2020/2021 marketing year, outstanding sales are much lower, currently standing at 17.8 million tonnes, compared with 29.4 million tonnes on 1 September 2020. While more sales will soon be added to the current level of outstanding sales, it is unlikely that volumes in the 2021/2022 season that is now underway will reach the 60.3 million tonnes of soy beans that were exported in the 2020/2021 season. 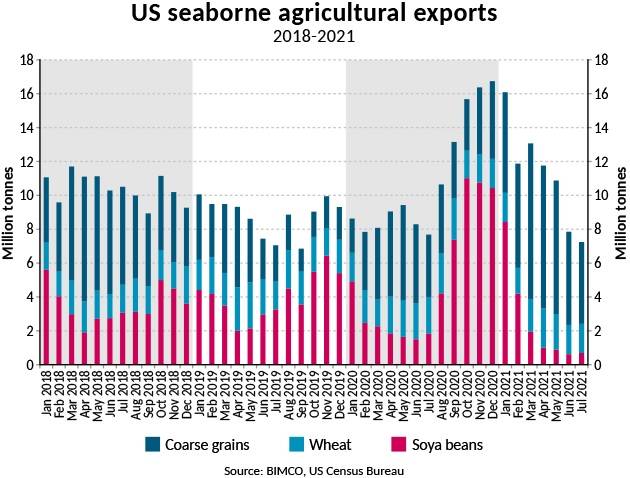 Fleet news
Around three-quarters of the dry bulk deliveries expected for 2021 have arrived, adding 26.7 million deadweight tonnes (DWT) of capacity and bringing the total fleet to 934 million DWT. BIMCO expects the fleet to grow to 940 million DWT over the coming months, which will result in fleet growth of 3% this calendar year. 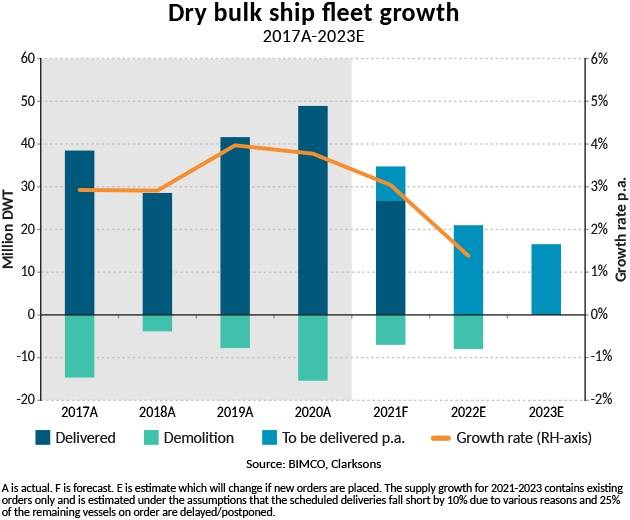 At the other end of the lifecycle, only 4.8 million DWT of capacity has been demolished. By the end of the year, BIMCO expects demolition to reach around 7 million DWT, less than half of what was removed from the market in 2020, as the earnings potential for ships has incentivized owners to keep their ships sailing. This once again proves that the strength of the freight markets has a much greater influence on demolition than steel prices.

The summer months have seen the dry bulk orderbook grow by 67 ships, as 5.7 million DWT was ordered in June through August. All but one will be delivered in 2023 and 2024. The orders include 2.3 million and 2.5 million DWT of Capesize and Panamax ships, respectively. 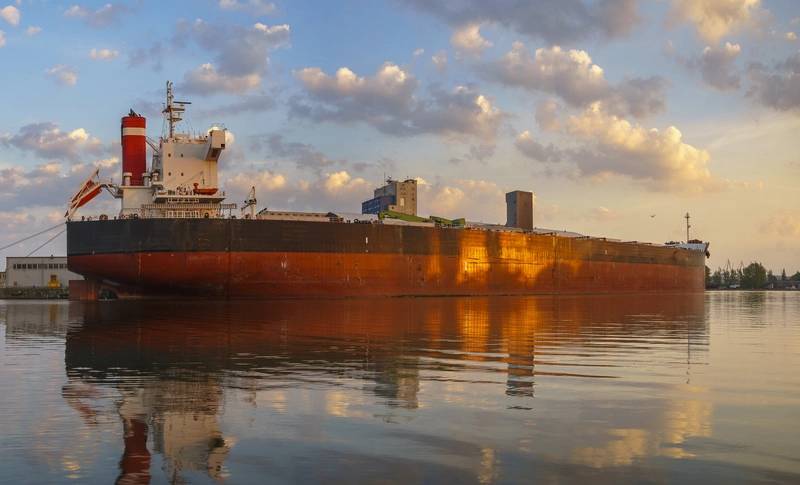 Outlook
As we approach what is seasonally the strongest part of the year for dry bulk, the market is looking promising, and operators have already been recording solid profits so far this year.

While countries enforce quarantine and testing requirements, and ports face sudden disruptions due to local and regional outbreaks, the congestion that is draining the market of capacity will continue to support earnings in the dry bulk market. The market is expected to stay strong into 2022 until the factors that are currently beneficial to the market such as congestion and pandemic related delays, spill-over from the red hot container market, stimulus driven demand and strong growth in the manufacturing sector become less so.

This positive outlook is also reflected in second-hand prices, which have followed the freight markets on an upward path. Compared to the whole of 2020, the price of a Capesize ship on the second-hand market has risen by 43.3%, based on disclosed prices so far this year. The average price of a Capesize ship currently stands at $28.4 million, with an average age of 9.4 years. All other second-hand dry bulk ships have also seen average prices rise by more than 40% year to date compared to 2020, with Handysize ships rising 68.4% to $12.1 million (average age: 9.9 years).

In the longer term, however, the underlying volumes may be less supportive. After strong growth in the first half of the year, the Chinese government seems keen to clamp down on the steel and other heavy industries in order to limit emissions. One big question is how strictly these measures will be enforced and whether they will start to constrain economic growth. The two largest dry bulk goods imported by China in terms of volume, iron ore and coal, have both fallen year-on-year during the first seven months of the year. Iron ore imports have fallen by 10.5 million tonnes (-1.5%) and coal imports are down by 30.4 million tonnes (-15%). Imports of both of these goods stood at a record high in 2020, and as government restrictions come into play, it seems increasingly unlikely that these levels of imports will be repeated.