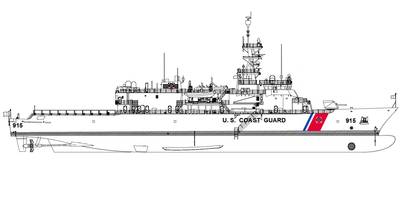 Eastern Shipbuilding said the U.S. Coast Guard executed a modification to the contract to build the second Offshore Patrol Cutter (OPC) and Long Lead Time Materials for the third OPC. These accomplishments result from successful completion of a Production Readiness Review (PRR) in February 2020.

Eastern’s President Joey D’Isernia said, "Today represents not only the continuation of production for the USCG’s future replacement of their 210-foot and 270-foot class Medium Endurance Cutters, but also an important step in the continuing recovery of Northwest Florida and ESG post Hurricane Michael. Looking back on the condition of our shipyard and our community immediately post Hurricane Michael in comparison to how far we have come, I could not be more proud of our team for what we have accomplished to date. We are excited about the future of this program and will continue to work diligently with our vendor network from 29 other states to produce high quality, highly capable vessels for the men and women of the USCG.”

The 360-foot OPC is designed to conduct multiple missions in support of the nation’s maritime security and border protection. The OPC will provide a capability bridge between the National Security Cutter, which patrols the open ocean in the most demanding maritime environments, and the Fast Response Cutter, which serves closer to shore.

The OPC design includes the capability of carrying an MH-60R or MH-65 helicopter and three operational Over-The-Horizon (OTH) small boats. The vessel is also equipped with a highly sophisticated combat system and C4ISR suite that will enhance capabilities to execute the service’s missions.

U.S. Coast Guard Commandant Adm. Karl Schultz said in his most recent State of the Coast Guard Address that the new OPC “will become the backbone of [the Coast Guard's] modernized fleet.”

“The first in its class, Cutter Argus, is already under construction and will be delivered in 2022. The Offshore Patrol Cutter program is set to deliver 25 hulls and that fleet will ultimately comprise almost 70% of our offshore presence.” Adm. Schultz said in February..

In September 2016 the Coast Guard exercised the option for Detail Design on Eastern Shipbuilding Group’s OPC contract, and in September 2018 the USCG exercised the contract option to begin construction of the series'  lead vessel, along with long-lead materials for the second OPC. Steel cutting for USCGC Argus commenced in January 2019 following delays at the shipyard related to Hurricane Michael in October 2018.

In October 2019, the Department of Homeland Security approved a limited extraordinary relief for the OPC contract as a result of damage to Eastern facilities caused by the hurricane, and adjusted the detail design and construction contract for up to the first four hulls. The Coast Guard will release a Request for Information to gauge industry interest in re-competing the remainder of the program.