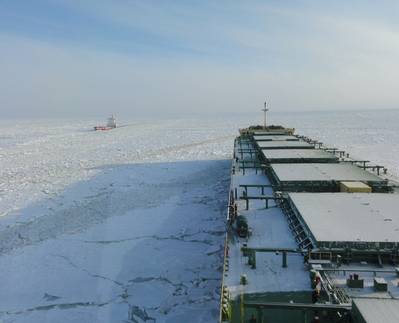 The new draft ‘Polar Code’ of safety and environmental rules, issued on 24, January 2014, fails to address the looming danger of having non ice-strengthened and poorly prepared ships in supposedly ‘ice-free’ polar waters, environmental organisations have warned.

The IMO has reached preliminary agreement on rules for the vessels, which will increasingly include oil tankers, container ships and cruise ships potentially operated by crew not accustomed to such harsh conditions. Blinded by the prospect of ‘ice-free’ operations enabled by the sea ice melt, the IMO makes the fateful assumption that these ships can safely operate without special hull protection or restrictions such as reduced speed.

The Polar Code’s environmental chapter also lacks ambition. ‘Residual’ heavy ship fuel oil, the dirtiest type of fuel used in the transport sector, would have a catastrophic environmental impact if spilled and is already banned in Antarctic waters, but the IMO dismissed the issue outright for the Arctic. Black carbon emissions – widely recognised as the second most important agent of climate change after CO2 – ballast water and oil spills have also not been addressed.

Bill Hemmings, on behalf of the environmental organisations [listed at the end here], commented: “A Polar Code which fails to address the major environmental dangers of increased shipping opens the door to potentially catastrophic consequences should a disaster happen. Environmental protection has essentially been put on the back-burner through the active lobbying of the shipping and cruise industry which consistently dismisses ecological concerns.”

“This is a disgraceful illustration of big business working behind closed doors to advance its own corporate interests before those of mankind and the unique polar environment. When the next big incident happens in polar waters the public will know where responsibility lies.”

The concerned organisations include Seas at Risk and Transport & Environment, as members of the Clean Shipping Coalition, as well as the Antarctic and Southern Ocean Coalition, Friends of the Earth US, and Pacific Environment.