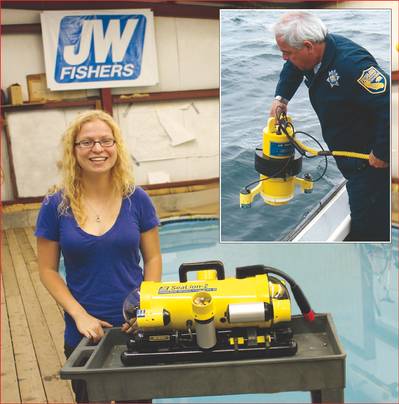 More universities and environmental groups are using underwater video systems to assist in their research and monitoring operations. These cameras can be very useful tools in studying benthic habitats and marine organisms, and to monitor the impact of pollution on the environment.

Darling Marine Center is the marine laboratory at the University of Maine. Home to world renown research and education, the facility is situated on the shores of the Gulf of Maine with its diverse intertidal habitats. Jennifer McHenry, a graduate student at the university’s School of Marine Science, is studying to become part of the new breed of marine scientists that will be tackling problems of how to  maintain the health and productivity of our oceans and waterways. This group will need to utilize all the high tech tools at their disposal if they are to be successful. One tool the university has acquired to assist these efforts is a remote operated vehicle (ROV). As part of her program McHenry researched the various types of ROVs available, their cost, and capabilities. After gathering information on several different models and presenting it to her professors, the group decided on JW Fishers SeaLion-2 with its four high performance thrusters, 1,000 foot depth rating, and two color cameras that pan and tilt.  Ms. McHenry came to Fishers factory to pick up the ROV and receive training on operation and maintenance of the system. Armed with this new equipment, she and her fellow students are now doing more “in depth” research and obtaining a better understanding of the ocean environment.

Another school using the ROV is the University of Alaska Fairbanks (UAF).  Their Institute of Marine Science is the oldest and largest unit of the School of Fisheries and Ocean Science. Much of their research focuses on arctic and Pacific subarctic waters, and their studies cover a wide range of disciplines with many national and international cooperative programs. UAF selected Fishers SeaOtter-2 to assist in their work as this ROV best fit their needs and the budget.  They also added the optional scanning sonar which allows the ROV operator to “see” what’s on the bottom in a 250 foot circle around the vehicle, regardless of water clarity. Terry Whitledge, one of the marine scientists responsible for the equipment, reports the ROV helps with the inspection and recovery of current meter moorings and in the exploration and study of shallow water sediments.

At NOAA’s Great Lakes Environmental Research Lab (GLERL) scientists are working to establish an ecological forecasting model for the Great Lakes. This effort involves predicting the effects of biological, chemical, physical, and human induced  changes on the ecosystem and its components. Their work encompasses a broad scope of factors including the impact of invasive species, affects of weather and climate change, and the links between physical, environmental, and biological processes. To aid in gathering data in the underwater environment, GLERL is using JW Fishers MC-1 mini camera. The 2 inch diameter, 8 inch long video system is equipped with high intensity LED light ring and can be lowered to the bottom, mounted on a helmet, or carried by a diver. The camera sends live video to the surface for viewing and recording. This inexpensive video system allows researchers to capture the interaction between species and their environment, and bring it back to the lab for further study.

The tiny middle east country of Kuwait is wedged between neighboring giants Iraq and Saudi Arabia, and is bordered by the Persian Gulf. The desert kingdom is small only by geographic standards as it has the world’s 5th largest oil reserves and is the 11th richest country. It is also home to the world-class Kuwait Institute for Scientific Research. Part of the institute’s mission is to advise the government on scientific matters and policy issues. One of their main objectives is to identify the country’s natural resources, and determine the best ways to utilize them. With almost 500 km of coastline along the gulf, Kuwait has significant aquatic resources to protect and explore. The work is made easier with the use of Fishers DV-1 drop video. This underwater camera system can be lowered to depths up to 1,000 feet and is equipped with a PAL format color camera and four 100 watt lights. An On Screen Display system allows position coordinates to be displayed on the monitor and recorded with the video picture. With the DV-1 scientists can create a video record of the underwater environment and use it as a baseline for future studies.

In the US Virgin Islands the National Park Service is very concerned about the impact of overfishing, encroachment of nonnative marine species, and sediment runoff. In a field station headquartered at the Biosphere Reserve on St. John, a group is investigating changes in the marine ecosystem and its causes. The research is a cooperative effort between the Parks Service, Jacksonville University in Florida and the Oceanic Institute in Hawaii. One of the tools being employed is Fishers TOV-1 towed video system. The torpedo shaped housing has a high resolution video camera mounted behind an acrylic dome and uses the power of the boat to move it through the water. The towed camera lets researchers conduct large scale video surveys in relatively short time.