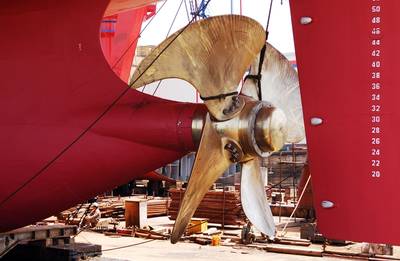 Germany’s marine and offshore equipment suppliers will have to continue efforts this year to respond to the continuing weak demand from other countries and growing competition in global shipping markets, says German Engineering Federation (VDMA) who reported a decline in orders in the maritime sector in 2017 as sales slid slightly to €11.1 billion ($12.7 billion).

However, according to VDMA, the general situation in mechanical engineering industry and digitalization show encouraging signs as companies stand to benefit from developing new markets, product innovations, digitalization and networking.
“Our high-tech sector with its more than 65,000 employees has still not seen the end of the decline in incoming orders, but there is a ray of hope on the horizon. We can say this because of the flexibility of marine and offshore equipment suppliers, as well as the good economic data from the German machinery and plant engineering industry that is now becoming apparent,” explained Dr. Alexander Nürnberg, Chairman of VDMA – Marine Equipment and Systems. “Overall mechanical engineering increased its forecast for machine production in real terms to plus 3 percent in 2017. However, this certainly does not apply to the maritime area on average. Although last year sales declined only slightly to €11.1 billion ($12.7 billion), incoming orders slumped significantly by 14 percent. We predict that there will be no major improvement for the sector as a whole also in 2017.”
However, individual maritime markets and segments are definitely optimistic: for ferries there is high demand in the short and medium term, and the same applies for electrical engineering systems and components, which with the ongoing process of automation are absolutely vital for the smooth, efficient operation of ships and plants.
“It is to be hoped that in the medium term the gratifying economic developments in the mechanical engineering industry will also have a positive effect on the entire maritime sector,” Nürnberg emphasized.
Market further consolidating
Meanwhile the shipping market is continuing to consolidate, new business models are changing the supply situation and established models are losing significance. “The growing digital possibilities have to be intelligently used in the interaction between operators, shipyards, equipment suppliers and beyond,” explained Martin Johannsmann, executive board member of VDMA – Marine Equipment and Systems. “Learning from one another across sectors” is thus the motto of the equipment and system suppliers. Their solutions are in demand in shipbuilding as well as associated areas in the maritime environment such as logistics, port technology and energy.”
Application of digital solutions
There is currently a great deal of discussion about Industry 4.0, but implementing and profitably applying networked production and services involve considerable hurdles for many companies. This process is proceeding fast and continuously in the maritime sector.
“Today we supply from the data generated by a whole variety of sensors on board vital information for the entire shipping sector,” Johannsmann explained in describing a new business model from his company environment.
“In Finland, the autonomous unloading of cargo ships is already beyond the research phase and now undergoing practical testing, thanks to integrated systems from our company group,” Nürnberg added.
Another example: port cranes from German makers supply information worldwide on equipment operating condition and performance optimization as well as the condition of the cargo being transshipped, cooperating with upstream and downstream logistics systems.
“Companies that are not alive to this development will be among the losers of digitalization,” Johannsmann warned. In the production of maritime technologies, competitive advantages are also realized via intelligent automation solutions. New sensor technology, data evaluation algorithms and interface definitions (OPC UA) have to be integrated.
Maritime energy transition must begin now
The digital solutions contribute significantly to the achievement of economic and environment-friendly goals in shipping. This involves the use of electric hybrid propulsion systems, as already deployed on ferries, to reduce environmentally harmful emissions. And in overseas transport the set climate objectives can be realized with the intelligent use of alternative fuels, which can successively replace fossil fuels on ships. “E-fuels” will play a particularly important role in this respect. Makers of large engines and the VDMA are thus advocating a maritime energy transition. It is important here to think beyond the internal combustion engine in itself and consider the overall propulsion system.
Digital service
According to a survey by the Fraunhofer CML, nearly all (93 percent) operators (shipping companies) anticipate a broadly based digitalization of their maintenance processes in the next few years and expect proposals for solutions from industry. An initial VDMA study found that precisely particularly successful companies in after-sales business focus on developments from the area of Industry 4.0, namely remote services and condition based maintenance, as well as management of services via management information systems. “The second study we commissioned, which is currently running, is concerned with digital service. From this we expect specific ideas for our sector,” explained VDMA Managing Director Dr. Jörg Mutschler.
Key indicators for marine and offshore equipment suppliers in Germany
Incoming orders down worldwide: Significant slump of 14.1 percent on average for 2016
Different developments in export markets: Other European countries are the main export market for German equipment suppliers for the first time again for years (claiming 37 percent of exports, previous year: 31 percent). The explanation for this is the stable order situation for leading European shipbuilding companies in their special segments. The long-standing frontrunner Asia follows with 34 percent. The most important Asian countries China and Korea roughly retained their shares of exports of German suppliers, China accounting for 21 percent and Korea close on 10 percent, whereas the share for the rest of Asia in 2016 fell significantly from 6.5 percent to 3.5 percent compared with the previous year’s period. Trade with North America also declined proportionately, from 11 percent in 2015 to only 9 percent in 2016.
Ship newbuilding orders at low level: Merely 223 oceangoing ships totaling 4,951m gt were ordered worldwide in the first quarter of 2017 (first quarter of 2016: 172 with 6,759m gt), including 19 in South Korea (eight), 66 in PR China (35), five in the Philippines (two), 28 in Japan (53) and 51 in EU-28 (23), including one in Germany (one). Global orders on hand for vessels came to 4,840 (5,807) units as of the first quarter of 2017.