The Center(s) of Expertise 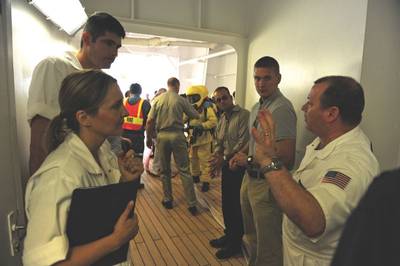 The U.S. Coast Guard opened seven National Centers of Expertise in 2009, locating three alone on the busy Gulf Coast, The concept of national centers of expertise – or “centers of excellence” – dates back to the 1960s when technology became more advanced and required new skill sets. The U.S. Army, Navy, Air Force and Marine Corps all operate such hubs, as do federal agencies, foreign governments and industries ranging from manufacturing to health care.

Without a doubt, the Coast Guard’s marine safety missions desperately need this, and more.

The centers address marine safety, an emphasis that declined soon after 9/11 as the Guard shifted much of its attention to security. More recently, as worries about marine safety were raised by Congress and others, the Guard responded by developing and implementing a five-year Marine Safety Plan, released in May 2008.

In addition to concentrating on safety, the centers of expertise make sure that U.S laws and policies and international treaties and standards regarding commercial vessels are uniformly applied, Flaherty said. The centers are also part of the Guard's preparation for new marine challenges in the future.

Because of growth in deepwater oil production, a center of expertise was opened at the Guard's Marine Safety Unit in Morgan City in mid-2009 to concentrate on offshore activities. Before that, the “Coast Guard Strategy for Maritime Safety, Security, and Stewardship,” a report released in early 2007 and signed by Admiral Thad Allen, said that increasing complexities of the U.S. Exclusive Economic Zone were a challenge to the maritime industry. In Louisiana, the EEZ extends from three miles to 200 miles offshore. Deepwater oil rigs are now located 175 miles and farther offshore.

The Guard's 2007 “Strategy” report said that new deepwater Gulf oil discoveries and associated effects on vessel traffic and offshore workforces hadn't been fully addressed by the Coast Guard. The Guard's “Evergreen II Project” report, completed in late 2009 as a framework for adapting to the future, also discussed the Gulf oil sector and noted that production was moving further out to sea.

The Morgan City center of expertise focuses on training for offshore inspections, responding to spills and pollution from oil drilling, and providing policy advice to headquarters. The center gave significant support to the response to the Deepwater Horizon incident by educating Guard personnel about offshore systems. Because of technology growth, Coast Guard headquarters needed briefings during the BP spill about how the offshore industry and its drilling processes work.

The New Orleans center of expertise, opened in late 2009, focuses on accident prevention, and provides training on casualty investigations of vessels and commercial diving accidents. A substantial number of casualties across the nation's waterways occur within the Guard’s Eighth District, headquartered in New Orleans. That's because of the size of the district, which reaches into 26 states, its major ports including New Orleans and Houston, and complexities of the Mississippi River and its tributaries. The Guard wants to reduce the Eighth District's casualties, however.

In the spring and summer of 2010, the New Orleans center of expertise assigned two employees to work directly on investigation of the Deepwater Horizon spill. The New Orleans center manages an online workshop for Guard marine-casualty investigators and staff regularly conduct casualty investigation courses held at Training Center Yorktown. Additionally, the center works with the Guard's Office of Investigations and Analysis, and reviews policies before implementation.

The Cruise ship center of expertise in Fort Lauderdale leads training on examinations of foreign cruise ships carrying U.S. passengers from American ports. Training addresses cruise ship safety, along with U.S. and international regulations for cruise ship operations. Ideally located in one of the busiest cruise departure hubs on the planet, the center affords the Coast Guard the perfect platform for its inspection personnel to come up to speed. The center's missions include providing personnel and support to other Guard units, expanding technical knowledge of cruise ship operations, and offering consultation to other Guard commands on cruise ship issues. The center supervises on-the-job training for Coast Guard personnel from other states.

The Vintage Vessel center of expertise in Duluth focuses on inspections of steam propulsion systems on commercial cargo vessels and safety inspections of those vessels. Notably, the center provides training on Great Lakes cargo ships during their winter layups.

The Great Lakes fleet contains some of the nation's largest, remaining deep-draft cargo vessels, including many 1,000-footers that are more than 50 years old. While much of the center's work deals with these freshwater vessels, it also encompasses older vessels operating in any environment--steamers in the U.S. Maritime Administration’s National Defense Reserve Fleet, older warships and sailing vessels, and any  built with technologies that are no longer in standard production. The center's experts are expected to develop and maintain vintage-vessel inspection competencies and curricula, perform vintage-vessel inspections, and establish merchant marine training in steam-powered and legacy hull fleets.

The Suspension and Revocation center of expertise in Martinsburg, West Virginia is co-located with the National Maritime Center, and exists to improve the skills of investigating officers examining over 600 U.S. complaints a year regarding mariners. The center coordinates with the Training Center in Yorktown, which has an established course for suspension and revocation. The Martinsburg center provides training and advice about the S&R process and hearing procedures to Guard sectors and investigators from other units. One of the center's staff members is an attorney.

The Guard is charged by law to ensure the professional conduct of more than 200,000 credentialed merchant mariners, and uses the suspension and revocation process in its Mariner Licensing Program to protect lives and ensure safety.

Since the centers of expertise were established in 2009, 705 Coast Guard personnel have had training that was held at, arranged by or supported by one of the seven centers, according to Flaherty. In addition, 104 industry representatives have attended training that was either held or arranged by the Guard's centers of expertise. Beyond this, Centers of Expertise staffers have participated in industry meetings and professional mariner gatherings, giving presentations on Coast Guard regulatory and commercial vessel inspection issues and talking with maritime industry members, Flaherty said.

He added, “The centers of expertise serve as liaisons between industry and Coast Guard headquarters by establishing partnerships with marine industry stakeholders.” The centers relay industry concerns, and help resolve regulatory issues and develop new regulations. And they conduct consultations and outreach with the maritime industry at every possible venue.”

It is difficult to say that the Coast guard – in direct response to industry criticism and their own internal audits – has not aggressively addressed the (sometimes) gaping gaps in knowledge and expertise necessary to properly oversee the industries that they regulate. That’s because they have. This; coupled with an aggressive recruiting drive to attract qualified maritime academy and marine industry veterans into their ranks has noticeably improved this sector of their mission set. More needs to be done. The Coast Guard’s Centers of Excellence (Expertise) are a critical part of that ongoing voyage.

Susan Buchanan is a New Orleans-based business writer, specializing in energy, maritime matters, agriculture, the environment and construction. She holds a master's degree from Cornell University in agricultural economics and an undergraduate degree from the University of Pennsylvania. (taken from our December 2012 MarineNews print edition)