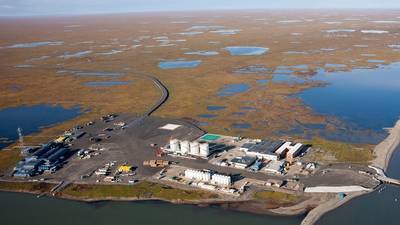 ExxonMobil said today it has started production at its Point Thomson project, the first company-operated project on Alaska’s North Slope.

The Point Thomson reservoir holds an estimated 8 trillion cubic feet of natural gas and associated condensate – a high-quality hydrocarbon similar to kerosene or diesel. The resource represents 25 percent of the known gas on the North Slope. Potential future development will depend on a range of factors such as business considerations, investment climate, and the fiscal and regulatory environment.

ExxonMobil and the working-interest owners have invested approximately $4 billion in the development of Point Thomson production facilities through 2015. About 100 Alaskan companies have contributed to the success of the project, and thousands of people worked onsite and around the state during peak construction activity.

“Our strong partnership with Alaskans and Alaska-owned companies played a critical role in helping to complete this major project,” Duffin said. “It further reinforces our commitment to pursuing the development of Alaska’s natural gas resources.”

Point Thomson is located on state acreage along the Beaufort Sea, 60 miles east of Prudhoe Bay and 60 miles west of the village of Kaktovik.