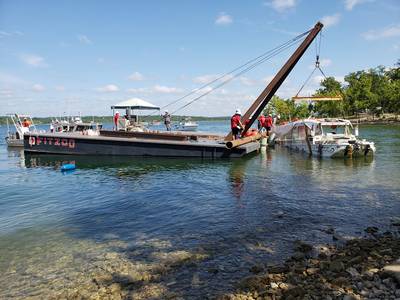 The U.S. Coast Guard oversees the removal of Stretch Duck 7 from Table Rock Lake in Branson, Mo., July 23, 2018. Missouri State Highway Patrol divers rigged the vessel, then a barge crane lifted it to the surface before it was towed to shore and loaded onto a flatbed trailer for transport to a secure facility. (U.S. Coast Guard photo by Lora Ratliff)

The captain of the World War Two-style tourist "duck boat" that sank on a Missouri lake during a storm in July killing 17 people was charged on Thursday with misconduct, negligence and inattention to duty by a federal grand jury, prosecutors said.

Kenneth Scott McKee, 51, of Verona, Missouri, was charged in a 17-count indictment, one count for each of the passengers who died when the vessel sank on July 19.

McKee was captain of the vessel operated by Ripley Entertainment Inc, which ran duck boat tours in Branson, Missouri, Lake Taneycomo and Table Rock Lake, where the incident occurred.

There were 31 passengers aboard the duck boat on Table Rock Lake, outside Branson, Missouri, when hurricane-strength winds churned up the water and sank the craft, causing one of the deadliest U.S. tourist tragedies in recent years.

"The captain of the vessel always has a duty to operate his vessel in a safe manner and that's why Mr. McKee is under indictment this morning," Timothy Garrison, U.S. Attorney for the Western District of Missouri, said in a news conference.

McKee is accused of failing to properly assess the severe weather, instruct passengers to use personal flotation devices, or head for shore and prepare to abandon ship, the indictment said.

McKee was not yet in custody and was expected to surrender to authorities, Garrison said.

He faces up to 10 years in federal prison without parole for each count and a $250,000 fine. McKee's lawyer did not immediately respond to requests for comment.

Garrison declined to say whether other people were being investigated.

The families of four people who died have filed lawsuits against tour operator Ripley Entertainment, which operates under the name Ride the Ducks, saying it recklessly allowed the vessel out in dangerous weather.

Nine members of the same family were among the 17 killed.

The boats, modeled on the amphibious landing craft used in the D-Day invasion of Normandy in 1944, have a checkered history involving more than three dozen fatalities on water and land, including the Table Rock Lake sinking, according to the complaint.