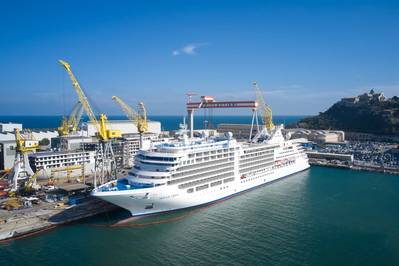 Fincantieri shares fell as much as 6.5% on Thursday on the prospect of a big capital increase by the Italian shipbuilder as it tries to cope with the coronavirus crisis which has hit its customers in the cruise industry

Bloomberg News reported late on Wednesday the state-owned firm, which has a market capitalization of about 1 billion euros, was considering a capital increase of up to 1.5 billion euros ($1.8 billion).

A spokesman for Fincantieri said no decision had yet been taken on various options for ‘extraordinary transactions’ which were being evaluated. A person familiar with the matter confirmed a new share issue was one of the possibilities.

Fincantieri has agreed with clients a postponement of some cruise ship deliveries in recent months to avoid cancelling previously acquired orders as a result of the impact of the coronavirus outbreak on the cruise industry.

To weather the difficulties Fincantieri borrowed 1.15 billion euros from a group of banks tapping a guarantee provided by the state as part of emergency measures against the pandemic.

Some analysts raised doubts about the size of the potential capital increase given it would be larger than the current group market capitalization.

“We do not view an equity issue, especially for the size mentioned by the press, as realistic,” Intesa Sanpaolo analysts said in their daily report.

Analysts at Banca Akros said that while “the suggestion of a big capital increase is realistic ... we argue that the dilution would be massive”.