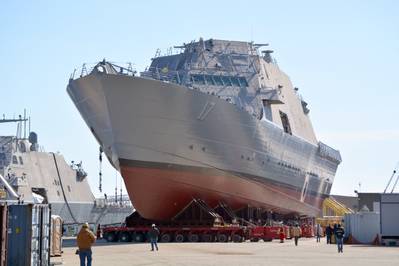 Fincantieri Marinette Marine and its board of directors announced that Mark Vandroff will be taking over as CEO effective July 7, replacing Jan Allman who has led the Wisconsin shipyard since 2014.

“Our company’s continued growth afforded us an opportunity to expand our senior leadership team and to better organize to exceed our customer’s needs,” said Dario Deste, CEO of Fincantieri Marine Group. “Jan [Allman] has done a tremendous job working with partner Lockheed Martin and the Navy on the Littoral Combat Ship and Multi-mission Surface Combatant programs, as well as helping our company secure the FFG contract. We are pleased that she has accepted a promotion and will continue to serve in her new role in our Green Bay office as FMG’s senior vice president of public affairs and community relations.”

“On behalf of Marinette Marine’s board of directors, I want to thank Jan for her dedication and hard work,” said Gary Roughead, retired Navy CNO and now chairman of the Marinette board. “Mark has an opportunity of a lifetime to lead the FMM team during an exciting time as we build the Navy’s Constellation Class frigate, a vital part of tomorrow’s Fleet.”

Vandroff, a retired Navy captain, brings a wealth of naval shipbuilding experience to the team responsible for designing and building the Navy’s Constellation-class frigates.

Vandroff has been with Fincantieri Marine Group since early in 2021, where he was the senior vice president of business development.

Vandroff spent more than 30 years in the Navy, which was highlighted by tours as the major program manager for Arleigh Burke-class destroyers and the commanding officer of Naval Surface Warfare Center Carderock, Md. He holds a B.S. in Physics from the United States Naval Academy and an M.S. in Applied Physics from Johns Hopkins University.

Prior to joining FMG, Vandroff served as the deputy assistant to the President of the United States and senior director for defense policy on the National Security Council staff. In this role, he served as the President’s senior White House advisor on a broad array of matters including defense capabilities, irregular and non-traditional warfare, strategic weapons, international security cooperation, military personnel, emerging defense technology, and space security. Prior to that, he worked in industry as vice president of maritime programs for Zenetex, LLC.

He has also been a frequent contributor to USNI’s Proceedings, The Strategy Bridge, and the Center for International Maritime Security. He was the recipient of the 2018 Gold Medal for Engineering Excellence by the American Society of Naval Engineers.