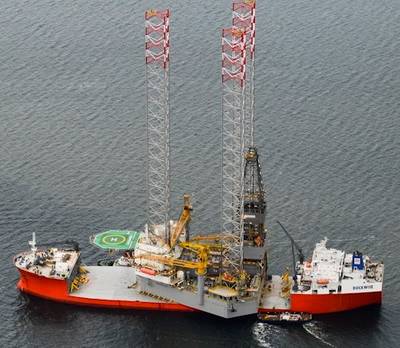 Prospector 1 arrives by ship in the Cromarty Firth. (Photo courtesy of WTS)

Order handling for the first contract was carried out between WTS’ Singapore and Poland offices and was completed in just 12 weeks to the satisfaction of the customer, which immediately requested a similar installation for Prospector 5.

Engineering and manufacturing for the second contract was carried by WTS Poland while the rig was still under construction, with piping pre-installed by SWS. The rig is due to arrive by heavy lift vessel at Invergordon by mid-August where final installation will be carried out.

Mike Evans, Sales Manager U.K. and Benelux, Wilhelmsen Technical Solutions said, “All owners, whether in offshore or marine demand a quick response, short delivery times and the ability to provide installation on turnkey basis. Both these contracts demanded very close teamwork across multiple locations, with good cooperation between departments to make sure we met the customer’s demands in terms of quality and timeframe.”

Calum Mitchell, Manager – Technical, Prospector Offshore Drilling, added, “The installation performed on Prospector1 at Invergordon had some initial challenges as proposed locations for the equipment and piping had to be adapted. The installation team, combined with the onshore support dealt with the issues accordingly and completed a successful install program whilst receiving high praise from the rig crew for their professionalism and execution. This was a major contributing factor to awarding the contract for the Prospector 5.”