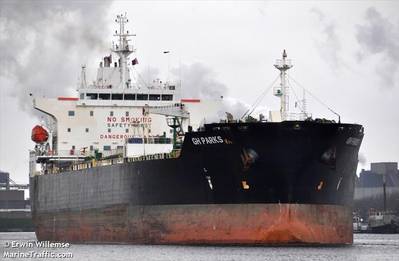 A ship carrying a cargo of diesel fuel initially barred from hurricane-hit Puerto Rico anchored at the island's Guayanilla port on Friday to unload under a Biden administration waiver, the Refinitiv Eikon vessel tracking service showed.

The Marshall Islands-flagged tanker GH Parks, which loaded in Texas this month, was stopped from discharging four days ago by the Jones Act, a maritime law that requires goods moved between U.S. ports to be carried by U.S.-flagged ships.

BP Plc, which chartered the vessel, said it submitted a waiver request with the U.S. customs service on Sept. 20 to allow for the diesel to be diverted from its original destination to Puerto Rico to assist with hurricane relief efforts.

GH Parks was carrying about 308,000 barrels of diesel, a BP spokesperson said.

Another Jones Act-compliant vessel chartered by BP and carrying about 185,000 barrels of diesel loaded in Texas City was also on its way to Puerto Rico and expected to arrive on Oct. 1, the company said.

Homeland Security Secretary Alejandro Mayorkas approved the waiver to ensure Puerto Ricans "have sufficient diesel to run generators needed for electricity and the functioning of critical facilities after Hurricane Fiona", he said.

An estimated 233,000 homes and businesses were still without power in Puerto Rico on Friday almost two weeks after Hurricane Fiona caused an island-wide outage for its 3.3 million people.