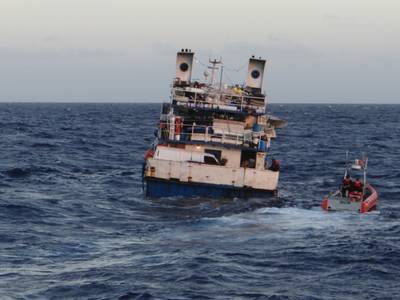 Watchstanders at the U.S. Coast Guard 7th District command center in Miami received a report from a tug stating they heard a distress call from a vessel claiming to be taking on water off the coast of Great Inagua, Bahamas.
A Coast Guard MH-60 Jayhawk helicopter crew deployed in support of Operations Bahamas, Turks and Caicos (OPBAT) launched and located the coastal freighter Calypso approximately 50 miles off the coast of Great Inagua. The helicopter crew lowered a rescue swimmer down with a dewatering pump. The freighter Calypso began to slowly transit to the coast of Haiti to investigate the source of the flooding.
At approximately 12:30 p.m. the Coast Guard Cutter Charles Sexton, a 154-foot fast response cutter homeported in Key West, Florida, arrived on scene and Coast Guard crewmembers were transferred to the freighter and assisted with the dewatering of the vessel. The freighter began to list on the right side due to the amount of water in the lower compartments. To ensure the safety of everyone aboard, all seven crewmembers were removed and transferred to the cutter Sexton with no medical concerns.
The Coast Guard Cutter Thetis, a 270-foot Medium Endurance Cutter also homeported in Key West, arrived on scene at approximately 7 p.m. and safely transferred the seven crewmembers from the cutter Sexton to the cutter Thetis.
At approximately 7:30 p.m., crewmembers from the cutter Thetis reported seeing the freighter Calypso continue to list on the right side before sinking approximately 45 miles north of Cap Haitien, Haiti.
The vessel sank in nearly 4,000 feet of water and has approximately 500 gallons of diesel fuel onboard. The Coast Guard said it will continue to monitor the situation for any evidence of pollution or debris from the vessel. No pollution is currently visible at this time.