Total E&P is First to Use FROG-XT4 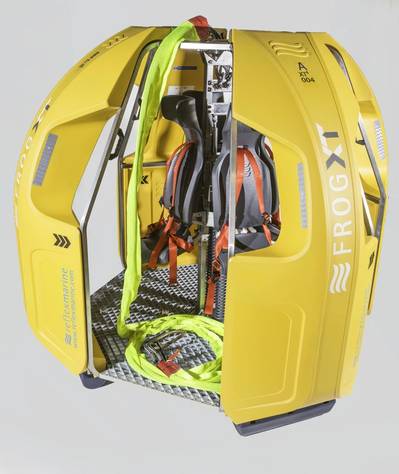 Total E&P is the first to use Reflex Marine’s newly developed FROG-XT4 on the Odudu field in Nigeria.

The French operator purchased the crew transfer device primarily for carrying out inter-field transfers. They have already found the device to be an invaluable backup method for when adverse weather conditions result in helicopters being unable to fly.

Feedback from Total highlights the devices advancements on Reflex Marine’s original FROG-3, previously supplied by the crew transfer company. The FROG-XT4 was developed in line with the industry’s continued drive to improve the safety of its operations – a vision which Reflex Marine shares.

Lifting points are now at eye level, making them easier to access and inspect and a new stretcher mounting system enables rapid deployment in a medical evacuation situation (MedEvac).

The deck foreman at Total E&P Nigeria said, “The FROG-XT4 is very portable and easy to transfer from Starboard to Port, and vice versa. In case of impact, it has better personnel protection with improved shielding compared to that of the FROG-3, previously used by Total. Another improvement would be the FROG-XT4’s shock absorbers.”

Total’s crane operator added, “The FROG-XT4 has a very small footprint and can fit on tight deck space compared to the previous model.”

The response from the wider industry on the new range has also been positive, with a second unit recently purchased by an international operator in Mozambique.

Reflex Marine has established a number of accredited service centers for FROGs and TOROs around the world, offering stock, spares, rental services, inspection and maintenance and training to exacting standards set by Reflex Marine; there is now stock on the ground at some of these partners facilities; Norway, Houston and Abu Dhabi.

An estimated one million safe crew transfers are carried out every year using the Reflex Marine’s FROG and TORO devices, Reflex Marine said.

Reflex Marine said it is now looking to launch a higher capacity version of the product, the FROG-XT10, to the market in the coming months.