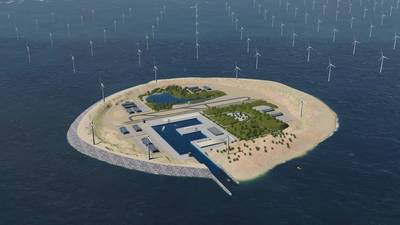 TenneT Holding said in a press release that in the first half of 2019, the wind energy transmitted from the North Sea to land by the transmission grid operator TenneT rose to 9.51 terawatt hours (TWh).

This corresponds to an increase of a good 16 percent compared with the first half of 2018 (8.17 TWh), said the transmission system operator in the Netherlands and in a large part of Germany.

"We see the share of electricity transmission from the North Sea stable at around 15 percent of the total wind power generation in Germany, which reached almost 64 terawatt hours in the first half of 2019", said TenneT COO Tim Meyerjürgens. There have also been further improvements in cost efficiency for new offshore grid connection systems in recent months.

Most recently, TenneT awarded a contract for the construction of the offshore converter platform and the land station for DolWin5 in May, achieving cost savings of around ten percent compared to the previous DolWin6 project.

"Thanks to the standardization of the offshore grid connection systems that we are pushing ahead with, it was also possible to achieve a lower cable price compared to the previous projects," says Meyerjürgens.

An important contribution to this cost efficiency was also made by the expertise bundled at TenneT as the leading transmission system operator at sea. With the connections currently planned and under construction, TenneT will increase the offshore transmission capacity in the German part of the North Sea to almost 9 gigawatts by 2024.

With regard to the current offshore expansion rate in Europe, Meyerjürgens said: "According to all international studies and scenarios, the current roll-out rate of offshore wind in Europe is not sufficient to achieve the goals of the Paris Climate Agreement for Europe. An accelerated and large-scale roll-out is necessary".

In this context, TenneT has just presented a feasibility study by the North Sea Wind Power Hub consortium on the implementation of wind power hubs in the North Sea.

"A future internationally coordinated approach could implement the connection and integration of a roll-out of large-scale offshore wind energy more effectively and at considerably lower costs of up to 30 percent than with continued individual national planning," says Meyerjürgens. Since the North Sea has a great potential for offshore wind energy, the implementation of 180 gigawatts of offshore wind by 2045 could be achieved through the consortium's approach.