Gjøa Gets its Sea Legs 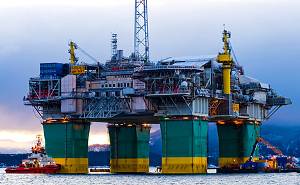 During the last few days the deck and hull of the Gjøa platform have been mated together in the fjord outside the Norwegian town of Stord. There were exacting requirements for precision and weather conditions during the operation, which was a success.

The four-legged hull rose from the sea in the sea off Stord and spiked the deck of the new North Sea giant, Gjøa. Four guide pins had to meet their respective slots in a deck the size of a football field, with a tolerance of just 1 inch in all directions.

The guide pins are designed to take the load should the platform list, so that it can be towed to shore before the deck is welded to the hull, allowing mechanical testing and commissioning of the platform to start sooner.

Slowly but surely, the ballast water was discharged; the hull rose towards the deck and they were mated into one. When the operation was completed, the draught of the hull was 42.6 ft. The mated platform was then towed to the quay, so that the work of mechanical completion could continue.

“I am impressed by this operation. It was well-planned, safe and efficient and carried out with the utmost precision,” says Kjetel Rokseth Digre, project manager for Gjøa.

The mating was carried out by Aker Stord, who are constructing the platform for Statoil.

During the past couple of months, more than 2,000 people have worked continuous shifts on Gjøa in order to make it ready for towing to the field in April. By carrying out the mating between Christmas and New Year when most workers are on vacation, a large number of inoperative staff onshore has been avoided.

“It was extremely important for us to get this done now. We now have a complete platform structure to work on, and we are doing everything in our power to get Gjøa ready by the agreed date,” said Digre.

Statoil is operator during the development phase of the Gjøa field. The plan is for the platform and the field to be handed over in October 2010, to GDF Suez E&P Norge AS, who will be operator during the production phase. Gjøa will be GDF Suez’s first operatorship for a field in operation.