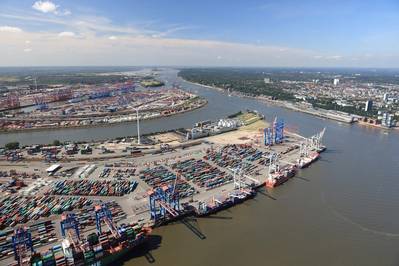 Comprising the general and bulk cargo segments, seaborne cargo handling in Hamburg during the first nine months at 104.3 million tons was at a stable level.

At 6.8 million TEU (20-ft standard containers), throughput of containerized general cargoes continued to grow; while at 34.1 million tons, bulk cargo throughput remained just below the previous year’s figure.
For Port of Hamburg Marketing, the excellent trend in container traffic with Canada is a gratifying pointer. The port’s marketing organization sees the CETA free trade agreement as providing an additional boost for seaborne trade that will benefit the Port of Hamburg.
"On container throughput, a total of 6.8 million TEU (up 0.4 percent) represented a renewal of slight growth. For loaded boxes, we achieved a 1.2 percent increase to 5.8 million TEU," said Axel Mattern, Joint CEO of Port of Hamburg Marketing, at the port’s quarterly press conference.
By contrast, handling of empty containers at 924,000 TEU was 4.3 percent lower than in the previous third quarter. Mattern mentioned the not yet implemented dredging of the Elbe fairway as one reason for the downturn in empty box handling.
Market research by Port of Hamburg Marketing indicates that restrictions on the Elbe applying to Hamburg plus limited tidal ‘windows’ are causing shipping companies are to use available slot space on their mega-containerships for loaded boxes as a matter of priority. Empty containers are increasingly being routed via other ports in Northern Europe, added Mattern.
Among Northern Europe’s major ports, Hamburg’s container throughput features the lowest proportion of empty boxes at 13.7 percent, and at 86.3 percent, the highest for loaded containers.
"With the navigation channel adjusted, we could increase both container and bulk cargo throughput in Hamburg. We therefore continue to closely monitor the downturn in empty box handling. From the angle of value added, which on handling loaded boxes can be seen as higher for the port, our throughput of loaded boxes underlines Hamburg’s attractiveness as a Northern European hub port," continued Mattern.
Against a background of far-reaching restructuring by leading container shipping alliances, closure of the BUSS cargo handling terminal and clearance delays caused by Customs staff shortages, the two port experts see the Port of Hamburg as having held its own well in the first nine months.
Of the 6.8 million TEU (up 0.4%) handled in Hamburg in the first nine months, 3.5 million TEU were import containers (up 0.7%) and 3.2 million TEU export containers (up 0.1%). The upward trend in container traffic with China, Hamburg’s leading trade partner by a wide margin, was maintained, with 2.5 percent growth to 2.0 million TEU.
With calls by containerships with slot capacities of between 14,000 and 17,999 TEU increasing by 36.9 percent to 167 and those by even larger vessels (18,000-20,000+ TEU) up by 87.8 percent at 77, the number of particularly large containerships seen in the Port of Hamburg further increased. Making maiden calls, among the latter were mega-carriers MOL TRUST with slot capacity of 20,170 TEU and MUNICH MAERSK (20,568 TEU).
Bulk cargo throughput was basically stable, being down one percent at 34.1 million tons in the first nine months. Imports and export trends differed. Imports were slightly lower, being 2.5 percent down at 25.1 million tons.