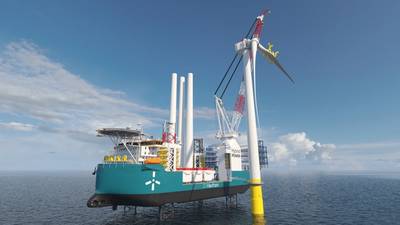 Norwegian firm Ocean Installer, best known for its subsea installation services in the oil and gas sector, in December 2020 changed its name to Havfram - Ocean Forward in Norwegian - saying the name change reflected the company's growing commitment to offshore wind.

Now, less than a year after the name change, the company is further strengthening its offshore wind commitment with the plan to order a jack-up wind turbine installation vessel capable of installing giant wind turbines of the future, aimed at the growing U.S. offshore wind market.

The company, which has set a target of having a majority of its income coming from renewables by the middle of the decade, said Monday it would order  "a new semi-submersible jack-up vessel to support offshore wind projects off the east coast of the United States and is looking at the opportunities for similar vessels for the European market."

"Designed to be futureproof, the vessel will have class-leading hook height and the capability to install the next generation of 20MW plus wind turbines while having the potential to be powered by zero-emission fuel," Havfram said.

Offshore Engineer reached out to Havfram seeking more details on the order and vessel design.

Given that the vessel is not expected to be built in the U.S., meaning it won't be Jones Act-compliant.

The Jones Act requires seaborne cargo shipped between two U.S. points to be carried by U.S.-built, crewed, and owned vessels

We asked Havfram how the company will deal with this.

Gregor Scott, BA Director, Havfram, said the vessel itself will not be Jones- Act complaint, but the way It will operate will be compliant.

"It will not transport turbines to and from the US, it will use US-flagged feeder barges and vessels, submerging to upload the turbines. The complete turbines will then be installed in compliance with the act," Scott said.

While the company is looking to pivot from oil and gas to wind, it is also doing the same with its workforce

Havfram said Monday it had almost doubled its global headcount in the past 18 months, taking it from 150 to 275, partly in response to increased work in projects across the world, but also to support the transition of its workforce to renewables.

“Within our current total workforce is a highly-experienced, dedicated core team of 40 working on our renewables projects,” said Gregor Scott, BA Director. “We have a small but growing renewables team, that is nimble and extremely agile in the way it can respond to new projects and totally customer focussed.

“There is a lot of talk about transitioning workforces from oil and gas to renewables. We’ve gone past the talking stage; we’re putting that transition into action. Seventy-five percent of the people working in our renewables team have moved over from oil and gas and we see that as a very strong transfer of skills.

Philip Lewis, the author of the recently released “International Wind Turbine & Foundation Vessel Installation Vessel Market Forecast” recently shared with us his views on the U.S. wind turbine installation vessel market, which currently doesn't exist, but the plans are there to build it. As a matter of fact, one vessel, Dominion's Charybdis is currently being built by Keppel at its yard in Brownsville, Texas.

"A key aim of the White House is to anchor one or two US factories for each major wind farm component. This is unlikely to benefit the first wind farms to be built – these will rely mostly on components manufactured in Europe and transported to the United States. This will change over time, with commitments having been announced for some key component factories," he said.

He said there was a target of four to six U.S.-owned specialized turbine installation vessels (WTIVs), which will help ease a potential supply shortage of installation vessels in the US. However, these will not come cheap, as the Jones Act calls for these vessels to be built in the U.S.

"The high CAPEX -close to 40% higher than South Korean & Chinese yards - will add to project costs. It is likely that the installation of US wind farms will be carried out by a mix of Jones Act compliant and foreign-flag vessels in the foreseeable future," Lewis said.

Located 15 miles off the coast of Martha’s Vineyard, Vineyard Wind 1 will have a generating capacity of 800 megawatts (MW),  capable of providing electricity to power more than 400,000 homes.