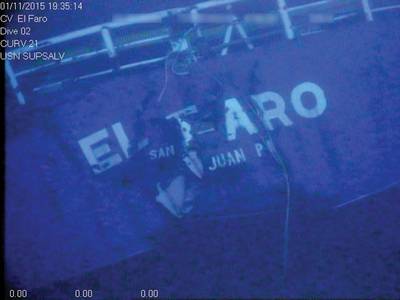 Stern of the El Faro (Photo:NTSB)

The U.S. Coast Guard will conduct a public Marine Board of Investigation hearing into the loss of the United States-flagged steam ship EL FARO, and its 33 crewmembers.
The first hearing session will focus on the pre-accident historical events relating to the loss, the regulatory compliance record of the EL FARO, crewmember duties and qualifications, past operations of the vessel and the Coast Guard’s Search and Rescue operations.  During a later hearing session (date to be determined) the accident voyage, including cargo loading, weather conditions and navigation will be examined in detail.  The National Transportation Safety Board, which conducted its own investigation, will fully participate in the Marine Board of Investigation hearings.
What:      Marine Casualty Board of Investigation
When:     Daily 9 a.m. – 4 p.m. ET Tuesday, February 16th – Friday, February 26th
Where:  Prime F. Osborn Convention Center
1000 Water Street, Jacksonville, FL 32204
The investigation will determine as closely as possible:
• The factors that contributed to the accident;
• Whether there is evidence that any act of misconduct, inattention to duty, negligence or willful violation of the law on the part of any licensed or certificated person contributed to the casualty; and
• Whether there is evidence that any Coast Guard personnel or any representative or employee of any other government agency or any other person caused or contributed to the casualty

The U.S. Coast's training barque is gearing up to begin summer training for more than 130 Coast Guard Academy cadets.At 295 feet in length…