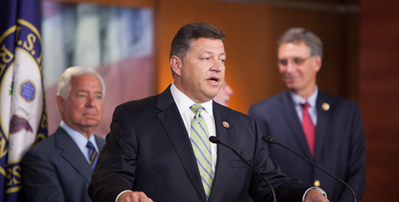 The U.S. House of Representatives voted 253-166 Wednesday to eliminate a recent Obama Administration rule that gives the federal government new authority to regulate virtually all waters or wet areas in the United States.
The House approved S. J. Res 22, a resolution of congressional disapproval that vacates the Administration’s rule, published on June 29, 2015, to broaden the definition under federal law of “waters of the United States” (WOTUS) and expand federal regulatory power under the Clean Water Act.
The Senate approved S. J. Res 22 in November, and it now goes to the President’s desk. The Administration has indicated that it will veto the measure, upholding the rule.
“The President needs to put a stop to this harmful rule once and for all. A majority of the American people’s representatives in both the House and the Senate have now voted, in a resounding manner, to scrap this rule, and the President should listen,” said House Transportation and Infrastructure Committee Chairman Bill Shuster (R-Pa.). “This rule was poorly developed, and as a result it will negatively impact the economy, threaten jobs, bring on costly litigation and infringe upon the rights of landowners, states and local governments. State and local governments, farmers, small businesses, homebuilders and many others have voiced significant concerns about the void in which the Administration created this unreasonable, burdensome rule. We can continue to protect our Nation’s waters without the federal government trampling the rights of everyone beneath it.”
“Since this rule was initially proposed, I have heard from farmers, homebuilders, county and township officials, and state environmental officials that are opposed to this rule,” said Water Resources and Environment Subcommittee Chairman Bob Gibbs (R-Ohio). “The Clean Water Act is intended to strengthen the federal-state partnership, not treat the states as adversaries. Access to and preservation of clean water is important to everyone, including and especially the agriculture community. Making the permitting process more burdensome and more expensive risks the improvements in water quality we have made since 1972. Not only is this a misguided and poorly written rule, the EPA also broke the law in promoting it. By stacking the deck in the public comment process and using what the GAO calls ‘covert propaganda,’ they further undermine their credibility on this issue.”
The U.S. Environmental Protection Agency (EPA) and the U.S. Army Corps of Engineers published the final WOTUS rule in June 2015. The House Transportation and Infrastructure Committee said this was done without properly consulting state and local authorities; without considering their rights, their responsibilities, their liabilities and their budgets; and without realistically examining the potential economic and legal impacts on private citizens, farmers and other stakeholders.
Since the rule’s promulgation, more than 30 states and hundreds of local governments have objected.
The U.S. Government Accountability Office (GAO) determined in December that the EPA illegally spent taxpayer dollars on “propaganda” and “grassroots lobbying efforts” in trying to build support for the rule and opposing legislation designed to force withdrawal of the rule.