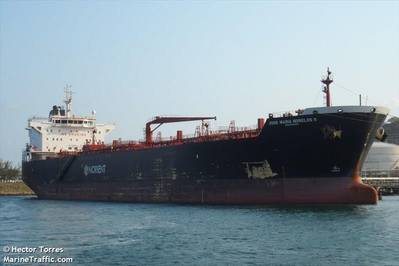 A diesel cargo sent by Mexico's state-run Pemex [was] due to arrive in Cuba's Havana port on Monday, according to Refinitiv Eikon data and sources, after Mexican President Andres Manuel Lopez Obrador promised humanitarian aid to the Communist-run island, [Reuters reported Monday.]

The Jose Maria Morelos II, a tanker owned and managed by a Pemex unit, is on its way to the Caribbean island after Mexico's left-leaning government last week announced it would send two humanitarian shipments, including food and diesel, to Cuba.

Authorities in Havana have long said that a decades-old U.S. embargo on Cuba has caused widespread hardship on the island, where thousands took to the streets this month in protests. Cuba's vital tourism industry has also been hard hit by the slump in travel following the global coronavirus pandemic.

The vessel departed from the Mexican port of Coatzacoalcos and is sailing with its transponder switched on, but has not updated its port of destination, according to Eikon.

Monitoring service TankerTrackers.com and a shipping source said it is navigating half-loaded. A Pemex source told Reuters the cargo contains 20 million liters or about 126,000 barrels of diesel.

Pemex declined to comment on the vessel's content and destination. The foreign affairs ministries of both Mexico and Cuba did not reply to requests for comment.

A separate shipping source said the tanker departed last week from the Coatzacoalcos port's berth number four, after being given "priority," which is why it loaded immediately.

The terminal is located nearby Pemex's Minatitlan refinery on the Gulf of Mexico.

The U.S. Treasury Department, which enforces sanctions, did not immediately reply to a request for comment.

Mexico said it would assist Cuba after this month's rare protests by thousands of citizens against the dire economic conditions on the island and the government's handling of the coronavirus pandemic.

Mexico said its policy toward Cuba is a demonstration of international solidarity.

López Obrador on Monday asked U.S. President Joe Biden to make a decision about the embargo on Cuba to allow families in the island to receive remittances.

Cuba's main fuel provider is Venezuela, whose own economy is mired in a deep recession that has sparked widespread shortages. Venezuela's oil production and refinery output has shrunk in recent years under lack of maintenance and tough U.S. sanctions, reducing its exports to Cuba.

(Reporting by Adriana Barrera and Marianna Parraga; additional reporting by Daphne Psaledakis in Washington and Sarah Marsh in Havana; Editing by Leslie Adler)