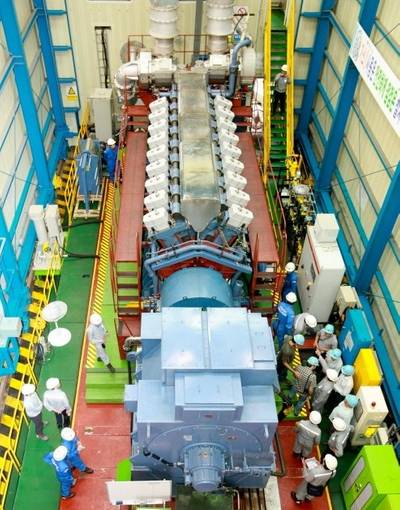 The new gas engine runs on liquefied natural gas rather than heavy crude oil and has a maximum power output of 13,000 bhp.

The HiMSEN H35/40GV can be used to generate power for onshore power plants, commercial ships, and offshore facilities including drillships.

The Ulsan, South Korea-based company will export the engine to an onshore gas-powered power plant in the Middle East after final paint and packing work.

Mr. Kim Jeong-hwan, COO of Hyundai Heavy’s Engine & Machinery Division said, “Due to high oil prices and strengthening regulations on emissions, the demand for gas engines is increasing. We expect these high-output gas engines to help Hyundai Heavy expand our product lines, diversify target markets, and boost sales.”   With a 35% share of the diesel engine market, Hyundai Heavy plans to be in the Top 3 for gas engines with a 15% market share by 2013.