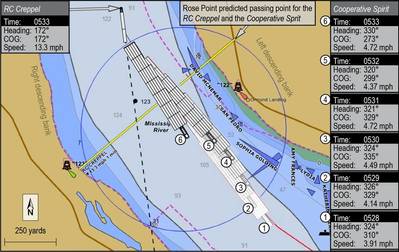 The lack of accurate tow size information and two pilots’ insufficient radio communication led to a fatal collision between two towing vessels in the Lower Mississippi River near Destrehan, La., according to a National Transportation Safety Board Marine Accident Brief released Thursday.

Marine Accident Brief 21/16 details the NTSB’s investigation of the Jan. 26, 2020, collision of the towing vessels Cooperative Spirit and RC Creppel. The RC Creppel, which capsized in the accident, had four crewmembers aboard — one was rescued and three others were never found. The accident resulted in a breakaway of a combined 42 barges from both tows, the discharge of approximately 8,000 gallons of diesel fuel into the river and the release of sulfuric acid vapors into the atmosphere. The collision resulted in an estimated $3 million in property damage to three vessels and 11 barges. The RC Creppel was not recovered.

The NTSB determined the probable cause of the collision of the Cooperative Spirit and RC Creppel was the two pilots’ insufficient radio communication before meeting in a bend and not broadcasting accurate Automatic Identification System (AIS) information regarding tow size.

In its report the NTSB said a radio call to the other vessel would have helped both pilots identify each other’s expectations, but neither pilot made a radio call after their initial call to arrange a meeting. The absence of a radio call or “danger” signal indicates that neither pilot was aware of the impending collision.

“When meeting or overtaking a vessel in a bend, especially where high-water conditions can increase the risk of a collision, early and effective communication is critical to ensuring a successful meeting,” the report said. “The use of very high frequency radio can help to dispel assumptions and provide bridge teams and towing vessel operators with the information needed to better assess each vessel’s intentions.”

(The graphic illustrates the approximate arrangement of the Cooperative Spirit and RC Creppel tows. The barges in orange were damaged in the accident. NTSB graphic by Christy Spangler)

The NTSB has previously noted the importance of ensuring that vessels engaged in towing operations broadcast accurate AIS information regarding tow size.

“The overall dimensions of a vessel and its tow may change significantly with each transit. For vessels towing ahead or alongside, the dimensions in AIS should reflect the overall rectangular area of the vessel and its tow,” the report said. “Consistently entering the complete dimensions of a tow configuration into AIS for each transit helps to alleviate possible misinterpretation and thus enhances the situational awareness of all waterway users.”