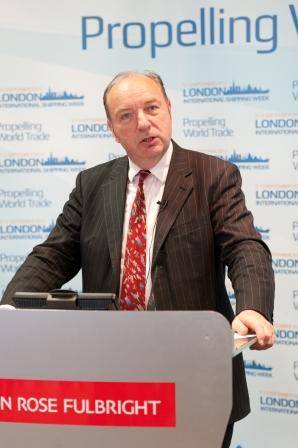 London’s crucial central role in the global shipping industry was highlighted when members of the international maritime community and representatives of the U.K. Government gathered to officially launch the first ever London International Shipping Week (LISW) last night.

Norman Baker MP, Parliamentary Under Secretary of State for Transport, spoke of the important role maritime business plays in both the U.K. and global economy as he addressed more than 100 guests gathered at the London offices of Norton Rose Fulbright, overlooking the Thames at sunset.

“The maritime sector currently contributes up to £14billion to the U.K. economy,” he told guests, who represented all sectors of the U.K.’s maritime community including regulators, banking, broking, insurance, legal and shipping associations. He also pointed out that employment in the U.K. shipping industry has continued to grow despite the recession and has increased by 100% since 2004.

Pledging that the U.K.’s Coalition Government “is keen to foster a closer and more coordinated partnership with both shipping and the wider maritime industry”, Mr. Baker revealed that it has established a maritime strategic partnership to bring together key government departments and industry champions to focus on maximizing growth and opportunities while maintaining a stable fiscal and regulatory environment. “The contribution of the maritime industry to the life and economy of the U.K. is fully appreciated at the highest levels of government,” he said.

The Minister also revealed that the U.K.’s ratification of the Maritime Labor Convention is expected to be formalized by the International Labor Organization next week.

Speaking afterwards, the Minister said, “I was delighted to join industry colleagues at the launch for London International Shipping Week. This week will showcase the great opportunities the U.K. has to offer the maritime business world and strengthen even further London’s prominent global position and reputation. It’s an opportunity not to be missed.”

Government will host a welcome reception at Lancaster House at the start of London International Shipping Week which runs from September 9-13. More than 80 international organizations have already pledged their support for this influential event and almost 50 meetings, seminars and social occasions are already scheduled.