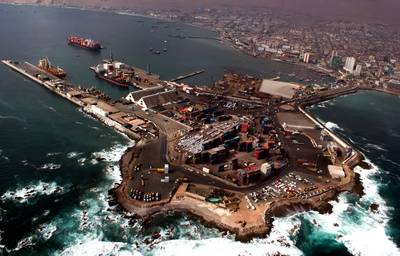 The regional governmental representative, Luz Ebensperger, was also present, along with other local authorities, such as the mayor of Iquique, Jorge Soria, the regional ministry secretary of transport and telecommunications Carlos Navarrete, the main chiefs of services linked to port operations –SAG, Customs and PDI- and representatives of operating companies.

“We are very excited about this process that we have just begun. This is a great challenge and we are confident that it will be a successful venture. We have worked a lot these past four years to project this port into the future and we know that this tender will contribute to the development of the entire region,” said Angel Cabrera, president of EPI.

The tender, which will have its first open call on Sunday March 9, has the goal to attract a new concessionaire to operate Port Iquique, adding to the services offer in the region and providing new work opportunities.

“Port Iquique has characteristics that make it unique. Aside from being in a natural island, that allows continuous growth within the port facility, we have managed to transform into the point of entry and exit of the cargo that comes from the Andean macro-region, an area that gathers South America’s main producers with the Asia Pacific markets,” Alfredo Leiton explained, general manager of the port administrator.

Also, the international tender of the Port Iquique terminal considers important expansion works, such as the construction of a third berthing facility or the amplification of the current one, projects that require investments between $350 and 120 million, respectively, and will allow Port Iquique to serve the upcoming generation of NewPanamax vessels able to transport up to 12,000 TEUs.