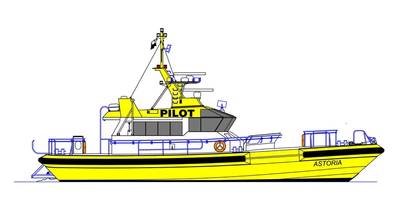 Kvichak Marine Industries was awarded a contract to build a self-righting 72’ all-aluminum pilot boat, Astoria, for the Columbia River Bar Pilots (CRBP) of Astoria, OR. The continued success and reliability of the Columbia and Chinook lead CRBP to once again choose Camarc, Ltd., of the U.K. as the designer and Kvichak Marine as the builder for the Astoria.

The pilots operate the vessels over the bar at the mouth of the Columbia River. Known for its extreme weather and turbulent waters, the Columbia River Bar is where the Columbia River collides with the Pacific Ocean. The resulting conditions require reliable, stable, and at times self-righting pilot boats that safely and successfully transport pilots to and from the ships, tankers and tugs that navigate across the Bar.

Delivery is scheduled for February 2014.