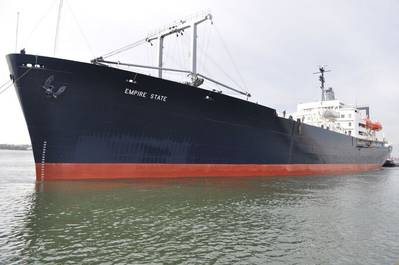 SUNY Maritime College’s Training Ship Empire State VI will soon sail to Puerto Rico to aid in the recovery efforts and to deliver basic necessities to the island’s residents.

The U.S. Department of Transportation’s Maritime Administration (MARAD) activated the vessel for a pre-scripted Federal Emergency Management Agency (FEMA) mission to support relief efforts. Once moored on site, the self-contained vessel will support recovery efforts by providing housing, power, food and water to first responders.
Prior to its departure from Key West, Florida, a donation drive was organized by Governor Andrew Cuomo’s Empire State Relief and Recovery Effort for Puerto Rico. The ship will be delivering dozens of pallets containing water, canned food, feminine products, baby wipes and diapers, and other items donated by people from across New York.
“After seeing firsthand the unimaginable devastation in Puerto Rico in the wake of Hurricane Maria, I am proud that New Yorkers are stepping up to the plate to support our brothers and sisters in need,” Governor Cuomo said. “Puerto Rico is part of the New York family, and these critical contributions from New Yorkers across the state are a testament to our unyielding commitment to help the island recover. Puerto Rico faces a long and difficult road to recovery, but New York will walk that road with them every step of the way.”
“The devastation in Puerto Rico is similar to what we saw in New Orleans after Hurricane Katrina. With such extensive damage from Hurricane Maria, I am proud that New York and Maritime College are able to provide such vital assistance,” said Rear Adm. Michael Alfultis, president of SUNY Maritime. “The hurricanes that have wrought devastation on our country these past few weeks have shown the vital purpose the nation’s fleet of training ships provide for disaster response, and underline the importance of finding suitable replacements for them.”
“While it is difficult to see continued devastation affect residents and communities throughout our country, SUNY is proud to stand as one with Governor Cuomo and all of New York State as we contribute to the recovery,” said SUNY Chancellor Kristina M. Johnson. “We are pleased to know that the bottled water and other supplies collected by SUNY Strong will be redeployed to Puerto Rico, where they are needed most. Thank you to President Alfultis and the Maritime community for continuing to lead this effort on SUNY’s behalf.”
The Federal Emergency Management Agency requested the use of three of the nation’s training ships from MARAD on September 1 in response to Hurricane Harvey. The Empire State’s original mission was changed from Texas to Key West, Florida, in the wake of Hurricane Irma. The Kennedy, the training ship used by Massachusetts Maritime Academy, was activated and sent to Texas. It is now en route to Puerto Rico.
Before the Empire State VI left its homeport in Throggs Neck, New York, it was loaded with 24 pallets of bottled water and food to distribute to those in need. The drive, organized by the State University of New York, collected more than $30,000 for the SUNY Strong fund, which purchased the items.
The Empire State VI is a 565-foot vessel, provided to the college by the federal government. It is capable of housing more than 650 people. It is used throughout the year to provide education and training to SUNY Maritime students who plan to pursue careers working on commercial vessels. In times of national need, it can be activated by the federal government to provide disaster response.
The federal government activated the ship in 2011 to respond to Superstorm Sandy and in 2005 for Hurricane Katrina.