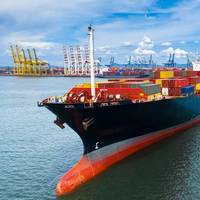 Hong Kong's Marine Department will resume all services, with the exception of surveying outside of Hong Kong, from May 4 after a suspension due to the COVID-19 pandemic, a deppartment spokesperson said Wednesday.Following the coronavirus outbreak, the department first suspended service on January 29 but resumed on March 2. Services were suspended once again from March 23.

Captain Valerie Lyzhyn and his 45 crew are stranded in Hong Kong, big losers in a gambling slump triggered by a Chinese crackdown on corruption that has scared off the high-rollers. Lyzhyn, 62, a Russian-born Ukrainian and veteran seaman, and his colleagues, refuse to leave their 140 metre (460 foot) casino cruiser the New Imperial Star until they get the six months of pay they say they are owed. Hong Kong's Marine Department has impounded the ship due to what it called "serious deficiencies" found during an inspection. Rations are running low, the ship's owners can't be reached and the cobalt blue felt covering the 16 baccarat tables is gathering dust.

Hong Kong’s Marine Department has issued a reminder about safe handling of containers following the investigation into the death of a sailor on board a container vessel during cargo unloading operations. The incident occurred while containers were being discharged from the cargo ship onto a barge, the Government of Hong Kong SAR Marine Department Notice No.106 of 2015 stated. The barge listed towards the container ship due to uneven disposition of containers loaded on the barge. 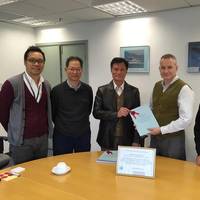 BMT Group subsidiaries BMT Asia Pacific and BMT Nigel Gee have been appointed to provide vessel design consultancy services to the Hong Kong government. The contract, awarded by the Hong Kong Marine Department following a competitive tender, includes provision for the design and specification of up to seven new composite patrol vessels for the Harbor Patrol Section. BMT said its experience in the design and specification of a wide variety of craft (GRP/steel/aluminum alloy) and hullforms (monohull/catamaran) delivered over the last decade was key in securing the contract…

Dredging operations will be performed at New Yau Ma Tei Typhoon Shelter with immediate effect and for a period of approximately six months, according to the Government of Hong Kong Marine Department Notice No.161 of 2014.   The works will be carried out by two derrick lighters, and two hopper barges, two tugs and one workboat will assist. The number of vessels engaged in the works will change from time to time to suit operational requirements.   A working area of approximately 50 meters around the derrick lighters will be established. Yellow marker buoys fitted with yellow flashing lights will be laid to mark the positions of the anchors extending from the derrick lighters. A silt curtain will be established at the immediate area where dredging by grab takes place.   mardep.gov.hk 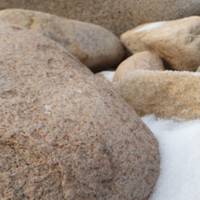 Regarding the massive spill of polypropylene plastic pellets into the Hong Kong waters from a cargo ship during typhoon Vicente in July 2012, and following active negotiations amongst the parties concerned, a Hong Kong Marine Department spokesperson said a settlement agreement was reached for a sum to be paid by the party concerned to the government to compensate the costs it incurred in cleaning up the plastic pellets. The spokesperson explained that due to the complexity of the legal issues involved…

Ferry Crew Fatigue the Cause of Hong Kong Accident 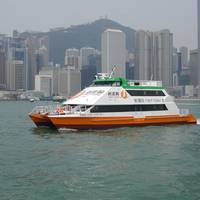 A Hong Kong Marine Department (MARDEP) enquiry into damage & passenger injuries caused when a local fast ferry hit the anchor cable of a vessel, found that 5 crew members were making their 15th voyage.of the day. "While the ferry was sailing at a speed of 22.5 knots at the Western Fairway, the coxswain and the assistant coxswain claimed to see a white light of a fishing boat crossing ahead of the ferry from port to starboard. The coxswain then steered the ferry to port for about 30 seconds to avoid collision with the fishing boat.

Campaign starts Sept. 2012 to inspect general safety conditions of Chinese container carriers (<3000 gt) plying Guandong & Hong Kong waters. to carry out the Concentrated Inspection Campaign from 1 to 30 September 2012. Mainland coastal container carriers trading to Hong Kong will be selected for inspection by the Hong Kong Marine Department (HKMD). inspection will focus on Automatic Identification System relating to its installation, maintenance and the crew's familiarization with the operation of the equipment, and maritime radio licence, etc. Detailed inspection may be conducted if there are grounds to believe the conditions of a vessel are not up to standards during the preliminary inspection. Vessels with serious defects detected may be detained until such defects are rectified.

The Hong Kong Marine Department issued a notice stating that, effective immediately, it will mark new dangerous wrecks in Hong Kong waters with the Emergency Wreck Marking Buoy recommended by the International Association of Marine Aids to Navigation and Lighthouse Authorities (IALA). Notice No. 173 of 2009 (12/17/09). (Source: Bryant’s Maritime News)

Brightoil Petroleum (Holdings) Limited, the largest service provider of marine bunkering in Shenzhen Port and its surrounding areas, announced its interim results as at 31 December 2008. For the six months ended 31 December 2008, the group's revenue surged to HK$2,942,195,000, representing a skyrocketing increase of approximately 237 times as compared to the corresponding period last year. Gross profit posted a year-on-year growth of 1,528% from HK$12,004,000 to HK$195,444,000. Profit attributable to shareholders went up significantly by 232% to approximately HK$168,082,000 and earnings per share jumped by 229% to 13.8 HK cents when compared to the same period of the previous year.

Austal has signed a contract for four additional 47.5 metre passenger catamarans with Cotai WaterJets (Macao) Ltd, adding to the initial ten-vessel contract signed in 2006 by sister company Venetian Marketing Services Limited (VMSL). The new vessels will be identical to those currently under construction at Austal’s Henderson shipyard and will be delivered in the first half of 2009. Completion of the entire 14-vessel order will see the number of Austal vessels delivered to China / Hong Kong waters grow to 52, reinforcing Austal’s success in the region.

needed to ensure the safety of personnel involved. Department. removal operation on board a vessel at anchor in the southern North Sea. on deck, the chief officer came between it and the accommodation bulkhead. and crushing his pelvis against the bulkhead. an easy exit. cover being lifted by the derrick of a dumb lighter. fell to his death.

The Hong Kong Marine Department issued a Notice stating that dredging, reclamation, drilling, piling, and seawall construction will be ongoing in the Central Harbor for the next six (6) months. Vessels operating in this vicinity should exercise caution. MD Notice No. 45 of 2004 (HK Law).

The Hong Kong Marine Department issued a Notice reminding owners and operators of the need to have the IMO ship identification number permanently marked in a visible and easily accessible place on the ship. Additionally, as of 1 July 2004, ships covered by the IMO requirement must include in their application for entry into Hong Kong waters the IMO ship identification number and a declaration that such number is permanently marked on the ship in accordance with the IMO requirement. Marine Department Notice No. 66 of 2004 (HK Law).

The Hong Kong Marine Department issued a Press Release stating that security plans have been approved for 22 of the 31 Hong Kong port facilities subject to the ISPS Code. Security plans have been approved for 595 Hong Kong vessels and International Ship Security Certificates (ISSCs) have been issued to 287 of these ships. The Marine Department also issued a Notice stating that, effective 1 July, maritime security levels for Hong Kong will be posted on a special Internet site. Source: HK Law

The welders and fitters are busy at the Guangzhou Panyu Lingshan Shipyard. A pair of self-dumping hopper barges are shaping up in one building shed on the shore of the Pearl River, while a 19 x 4.5-metre patrol launch for the Hong Kong Immigration Department awaits the installation of a pair of Cummins QSK19 engines with 3:1 ZF gears in an adjacent shed. The launch, built to Hong Kong Marine Department standards, has a pair of Cummins/Onan generator sets and a 15-knot running speed. On the inland side of the building sheds, steel is being cut and shaped for additional projects. At the fitting out dock, a handsome 29.4-metre tug is having a pair of 12-cylinder 1200-HP Cummins KTA38-M2 engines fitted.

The Hong Kong Marine Department issued a statement outlining that it is strictly enforcing the requirement that vessels must submit a Pre-Arrival Notification (PAN) at least 24 hours before arriving in Hong Kong waters. Four ships were recently found to be in violation – their masters subsequently brought into court and charged. Failure to submit a timely PAN subjects the owner and the master both to a potential fine of $5,000 (HK$40,000).

Pacific Century CyberWorks Ltd. said its PCCW-HKT telecommunications unit on Wednesday signed an agreement to provide advanced vessel traffic monitoring systems for the Hong Kong Marine Department. PCCW said the agreement was signed with Holland Institute of Traffic Technology (HITT), to which the Hong Kong government has awarded a HK$158 million surveillance equipment contract with PCCW-HKT as its sub-contractor. The marine project is due for completion by the end of 2001. HITT will be responsible for the project's overall design and software applications development. PCCW-HKT will operate and maintain the system once it is up and running.

The Hong Kong Marine Department issued a press release reporting that the Director of Marine has ordered an investigation into the circumstances surrounding the collision of the Singapore registered KOTA HADIAH and a Hong Kong dredger. Seven crewmembers of the dredger are missing. Source: HK Law

The Hong Kong Marine Department announced that the port is ready to handle the next generation of container vessels. Hong Kong port is capable of receiving the next generation of container vessels and Kwai Chung's alongside water depths are currently adequate to meet navigational requirements of large containerships, a spokesman for the Marine Department said. The assessment was reflected in a study, “Yesterday Evening and Tomorrow Morning of Container Fleet” conducted by the Marine Department earlier. The study confirms that Kwai Chung is able to serve not only large containerships currently in service, but also those expected to be in operation within the next few years.

Austal announces the recent multiple ferry orders are for Venetian Marketing Services Limited (VMSL). This represents ten 48 metre passenger catamaran ferries awarded following a competitive international tender process. Adding to its fleet of thirty six vessels delivered to China / Hong Kong waters Austal was able to deliver a proven solution and the best overall package. This included meeting a challenging delivery schedule for the boats to be in operation in 2007 and 2008. With the capacity to carry 411 passengers at a service speed of 42 knots, the ferries will provide a link from Hong Kong locations to the new Pac On Ferry Terminal being built by the Macau Government to provide a service to The Cotai Strip on Macau.