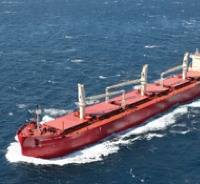 The Port of Detroit welcomed the arrival of the ocean going vessel, Federal Yukina as it arrived at the Nicholson Terminal & Dock Company, located at 4105 West Jefferson Ave. in Detroit. The ship's arrival will begin the Port of Detroit's 2012 shipping season. "With the advent of the warm weather approaching, it is exciting to welcome the Federal Yukina vessel to the Port of Detroit because it signifies freight transportation throughout the St. Lawrence Seaway. This is vitally important to our economies and security…

U.S. Transportation Secretary Norman Y. Mineta today announced the resignation of Captain William G. Schubert, Maritime Administrator of the Department’s Maritime Administration. The Secretary praised Schubert’s accomplishments and service to the Nation during a three-year tenure. “Bill brought real life maritime experiences directly to his job as Administrator and he has been a tremendous asset to the Department,” Secretary Mineta said. Captain Schubert managed a large-scale…

The Maritime Administration (MARAD) has awarded new contracts to dismantle two ships from the James River Reserve Fleet at Fort Eustis, VA, the agency announced today. The work will go to Bay Bridge Enterprises, LLC, of Chesapeake, VA. The two ships will bring to 14 the number of ships that have left the James River site for disposal in the past year, and to 41 the number that have left since January of 2001. Bay Bridge Enterprises, which has dismantled six other ships for MARAD in the past two years, was awarded two contracts: one to dismantle the Sunbird, for $85,920, and another to scrap the Mizar, for $243,900. The Sunbird, a Chanticleer-class submarine rescue ship, was built in Savannah, GA and launched in April 1946.

International Shipbreaking Limited (ISL) of Brownsville, TX, was awarded contracts for removing two ships from the James River Reserve Fleet at Fort Eustis, VA, the U.S. Maritime Administration (MARAD) announced today. “These contracts are further evidence of our commitment to reduce the number of obsolete ships in our fleet as quickly, safely and efficiently as possible,” said Acting Maritime Administrator John Jamian. “These important contracts continue MARAD’s successful scrapping program aimed at removing the most seriously deteriorated ships in the James River Fleet. This work is absolutely essential to protect the James and surrounding communities,” said Senator John Warner.

A Department of Transportation program that helps supply U.S. military forces in the combat theater will continue supporting the Department of Defense and other U.S. government agencies under new contracts announced. Tthe Department of Transportation’s Maritime Administration (MarAd) announced that its all-cargo fleet of fifty-four Ready Reserve Force (RRF) ships will be maintained by nine American owned and operated ship management firms under a new set of contracts that have an estimated total value of $1.9 billion over 10 years. “We have seen first hand that the Ready Reserve Force provides a vital link to the men and women of the armed services by carrying thousands of military vehicles, aircraft and other materiel to support operations in Afghanistan and Iraq,” U.S.

Two more ships are leaving the James River, headed for disposal facilities in Virginia and Maryland, in what has become a regular occurrence since the Bush Administration took over management of the nation’s ship disposal program five years ago, the U.S. Maritime Administration announced. The Howard W. Gilmore is scheduled to leave the James River Reserve Fleet at Fort Eustis on Thursday, making it the 50th ship to leave the river since January 1, 2001. It is one of the last World War II-vintage ships still at the fleet, which is good news for the ship disposal program, according to John Jamian, MARAD’s Acting Administrator. In a news conference at the fleet site today, Jamian said, “Our disposal efforts can keep moving to newer ships, which bring better prices in the scrap steel market.

The Training Ship Empire State left New Orleans on Friday, March 3, marking the end of an unprecedented six-month mission for the U.S. Department of Transportation’s Maritime Administration (MarAd). Ten of the agency’s ships were activated to aid in recovery and relief efforts in Hurricanes Katrina and Rita. This marked the first time the ships of MARAD’s Ready Reserve Force were activated at the request of the Secretary of Transportation to deal with a domestic emergency, and the first time training ships provided by MARAD to State maritime academies were pressed into service to provide food and shelter. Six ships of the Ready Reserve Force: Cape Kennedy…

For the first nine months of 2005, cruise passenger traffic in North America was 4.5 percent above the same period in 2004, despite the impact of hurricanes on Gulf port cruises, according to third quarter statistics released by the U.S. Maritime Administration. The data, part of the MarAd’s regularly-issued cruise passenger series, also show that cruise passenger traffic is up 18.5 percent over the same period in 2003, the year that MarAd first began publishing these statistics. Moreover, 15 out of the 17 cruise lines analyzed in the series showed an increase in traffic in 2005. Deputy Maritime Administrator John Jamian attributed the overall pattern of growth to “a vibrant U.S. The traffic figures highlight the impact of hurricane Katrina.

According to reports, a top U.S. Maritime Administration official says 2006 could be a good year for the reduction of the aging, environmentally unsound "ghost fleet." Deputy maritime administrator John Jamian said he expects to remove 11 or so obsolete ships from the James River Reserve Fleet next year. The announcement reinforces the agency's earlier predictions that it would miss a congressional deadline to get rid of all the ships by September.

U.S. Transportation Secretary Norman Y. Mineta announced the appointment of Julie Nelson as Chief Counsel for the Department’s Maritime Administration. “Julie brings the right combination of experience to the job,” said Acting Maritime Administrator John Jamian. “Her experience in industry and her credentials in the field of Maritime and Admiralty Law give her a solid understanding of the work we do here,” he said. Nelson joins MARAD from Oceaneering International, Inc., an ocean engineering development group, where she served as General Manager and Maritime/Contracts Attorney. Previously she served as General Counsel and General Manager for Nauticos Corporation of Hanover, MD, also a high-technology ocean engineering firm. Nelson received her B.G.S.

Michael Carthew, President, Chevron Texaco Shipping and Dean Taylor, President and CEO, Tidewater Marine were elected to the ABS Board of Directors, by the ABS Council, following yesterday's Annual Members Meeting of the classification society in New York. General Dynamics announced the appointment of John F. "Dugan" Shipway, 60, as president of Bath Iron Works, reporting to Michael W. Toner, executive vice president of General Dynamics Marine Systems group. Shipway succeeds Allan C. Cameron, 57, who has announced his retirement. Cameron had been president of Bath Iron Works since 1996. Edwin W. Stephan, a founder and former longtime president and vice chairman of Royal Caribbean Cruises Ltd., will retire from the Board of Directors following the company's May 20 annual meeting in Miami.

U.S. Secretary of Transportation Norman Y. Mineta today announced the appointment of John Jamian as the Deputy Administrator for the Department of Transportation’s Maritime Administration. “John brings a wealth of experience to the Department. His leadership and team building skills will be invaluable in achieving the department’s strategic goals, and will prove to be important assets as we meet the challenge of improving our nation’s maritime transportation systems,” said Secretary Mineta. Jamian has extensive experience in the maritime industry and international transportation and trade development. During his tenure as a Michigan legislator, which began in 1991, he served as Chairman of the House Task Force Committee on Port and Maritime Affairs.

MarAd Moves Ahead on Ship Disposal

The Maritime Administration (MARAD) announced four new disposal contracts for obsolete ships in its National Defense Reserve Fleet. Two of the ships are in the James River Reserve Fleet in Virginia, and two are in the Suisun Bay near San Francisco, CA. Three of the ships will be dismantled in Brownsville, TX, and one in Chesapeake, VA. “Our ship disposal policy of ‘worst first’ has worked for us,” said Deputy Maritime Administrator John Jamian. “We have cleared out the ships in the worst condition, most of which were in the James River. The Santa Lucia, a 1966-vintage cargo ship, currently in the James River site, will be towed to the Marine Metal facility in Brownsville…