Man Medevaced from Charter in GoM 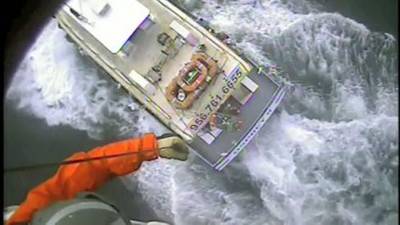 A Coast Guard rescue swimmer is lowered to the Osprey II and a man suffering from chest pains is hoisted back up Saturday near Port Mansfield, Texas. U.S. Coast Guard video by Air Station Corpus Christi.

The U.S. Coast Guard (USCG) reported that it rescued a 55-year-old man Saturday, who was suffering from chest pains while out on a charter boat approximately 22 miles northeast of Port Mansfield, Texas.

According to the USCG report, at approximately 11:20 a.m., watchstanders at Coast Guard Station South Padre Island received a VHF radio call from the captain of the 55-foot charter boat, the Osprey II, requesting assistance. The captain stated that there was a gentleman aboard who was suffering from chest pains and he was going in and out of consciousness.

When the helicopter arrived on scene, the aircrew lowered their rescue swimmer and hoisted the man. He was then placed on oxygen for the transit to Valley Regional Medical Center in Harlingen where he was in stable condition. The response boat was able to take aboard the man’s brother and transport him back to shore as well.

“We put our training to use today,” said Lt. j.g. Gregory Bukata, the MH-65 Dolphin pilot. “I am honored to be the one to answer the call.”