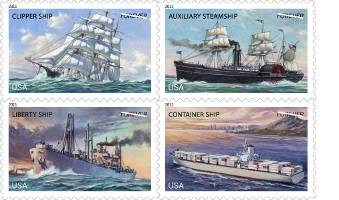 The Postal Service will salute the U.S. Merchant Marine on four forever stamps July 28 at the United States Merchant Marine Academy in Kings Point, NY.  Admission is free and the public is welcome to attend the 11:30 a.m. dedication ceremony that takes place in the Ackerman Auditorium, 300 Steamboat Rd.

Since the founding of the republic, the United States has looked to the commercial maritime industry for much of its growth and security. This issuance pays tribute to the U.S. Merchant Marine, the modern name for the maritime fleet that has played this vital role. The four-stamp design on this pane features types of vessels that have formed an important part of this history: clipper ships, auxiliary steamships, Liberty ships, and container ships.
Clipper Ships
The clipper ship, notes maritime historian Benjamin Labaree, was “a unique American contribution to the glory of seafaring.” Hundreds of “Yankee” clippers, noted for their streamlined shape and majestic cloud of square-rigged sails, were built from the 1840s through the 1850s. Their heyday arrived with the California Gold Rush of 1849, which hastened the need for faster sailing ships to take prospectors and supplies out West. In 1851, the fastest of the clipper ships, the Flying Cloud, sailed the 13,000-plus miles from New York around Cape Horn to San Francisco in a record eighty-nine days. Clippers also boosted the trade in tea, bringing it fresh from China to England and America. Clipper ships eventually lost their dominance to the more dependable steamship, which had greater cargo capacity and could sail on regular schedules. But during the time they “flashed their splendor around the world,” as Samuel Eliot Morison has written, clippers embodied the poetry of the seas.
Auxiliary Steamships
In the mid-nineteenth century, steam-powered ships competed with clipper and other sailing ships for transatlantic mail and passenger service. In America the most magnificent of these were the four large wooden-hulled, sidewheel steamships—the Atlantic, Baltic, Pacific, and Arctic—that were built by New York entrepreneur Edward K. Collins in the 1840s. Like many steamships of the time, they included back-up or auxiliary sailing rigs to supplement their powerful engines. The elegant, 280-foot ships of the “Collins Line”—the ocean liners of their day—were notable for both speed and cargo-carrying capacity. They provided service between New York and Liverpool in the 1850s and set numerous transatlantic speed records before rising costs helped bring an end to their business.
Liberty Ships
During World War I, the United States learned how to mass-produce merchant ships. But the nation remained without a settled policy for maintaining a modern merchant marine to meet its economic and defense needs until 1936, when legislation established the U.S. Maritime Commission and empowered the “U.S. Merchant Marine” to serve as a naval auxiliary unit. The Commission immediately began increasing the size of the country’s merchant fleet and shortly before America’s entry into World War II ordered the production of plain but sturdy cargo vessels called Liberty ships. Over the next four years, the United States produced more than 2,700 Liberty ships--“the most impressive single page in the history of the American shipbuilding industry,” according to historian Allan Nevins. They served in all theaters of war and sustained the Allied forces with a steady supply of food and war material. These ships were manned by members of the U.S. Merchant Marine, whose sacrifices, though less heralded than those of U.S. Navy crewmen, were no less critical to the war effort.
Container Ships
Without the container ship the global economy as we know it would be impossible. These ships, each loaded with thousands of containers measuring either 20 or 40 feet in length, carry virtually all the products and materials that end up in our local stores. “In 2006 alone,” according to a maritime history exhibit at the Smithsonian Institution, “about 18 million containers stuffed with cargoes of all sorts were sent on more than 200 million trips by sea, rail, and road to places around the world.” Container ships were pioneered in the 1950s by Malcom McLean, a trucking operator from North Carolina. McLean’s idea was to eliminate multiple handling costs by standardizing the shape of a container so that it could be easily moved between different modes of transportation: truck, rail, and ship. Intermodal transportation took hold and created efficiencies that transformed the global economy. By the end of the twentieth century, container ships carried nearly all of the world’s manufactured goods and exemplified the modern merchant marine.
The U.S. Merchant Marine stamps are being issued as Forever® stamps. Forever stamps are always equal in value to the current First-Class Mail one-ounce rate.