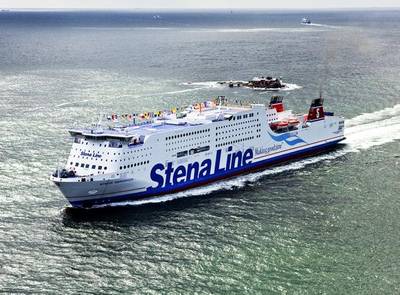 Ropax vessel Stena Germanica will soon be converted to a dual-fuel methanol propulsion system at Poland's Remontowa shipyard.
The 240-meter-long, 1,500-passenger ferry, which will be converted over a 45-day period from 28 January, 2015, will reportedly be the world's first ever methanol-powered sea vessel. Approval and classification will be by surveying teams from Lloyd's Register (LR).
Preliminary tests on a methanol-modified Wartsila engine 6ZAL40S similar to the Germanica's were overseen in Trieste by five LR teams from our Copenhagen, Trieste, Gotheburg, Venice and Southampton offices.
LR's Trieste-based Lead Specialist, Roberto Costantino, said, "We carried out three days of tests on a modified engine at Wartsila's R&D laboratory so as to understand the engine performance when running with methanol. While the test engine is a similar type to the four engines on the vessel, it has fewer cylinders. So the builders are converting the existing ones on the ship."
The new fuel arrangement on the Germanica, which is owned and operated by the Swedish ferry operator Stena Line, will combine methanol as its primary fuel with marine gas fuel (MGO) as a back-up power source. SOx emissions are expected to be cut by 99%, NOx; by 60%, particulates by 95% and CO2 by 25%.
Stena Line's CEO Carl-Johan Hagman said, "The emissions from methanol are comparable to LNG, but the requirements for handling and infrastructure are much lower. The construction team are looking at and will use several different exhaust gas treatment technologies and if the methanol project is a success we will convert more vessels."
lr.org