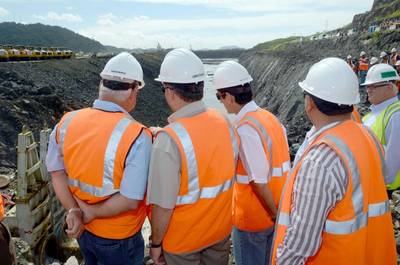 Panama President Ricardo Martinelli witnessed a new milestone at the Canal Expansion with the filling of a segment of the new access channel that will allow the transit of Post-panamax vessels between the new Locks and the Culebra Cut. Panama Canal Authority Board of Directors Chairman and Canal Affairs Minister Rómulo Roux and Panama Canal Authority Administrator Alberto Alemán Zubieta accompanied President Martinelli as he activated the valves to fill up this new channel which is located under the Centennial Bridge, the closest area to the Culebra Cut.

“Today we witness another important milestone of the Panama Canal Expansion, which shows the work is progressing satisfactorily,” said Rómulo Roux. Roux added that the expanded Canal “will be able to meet the demands of world trade and will change shipping patterns which will translate into more opportunities for Panama and the region.” Alemán Zubieta said that “the Canal continues to focus on enhancing the value of Panama as a world trade route as our country offers all kinds of geographic and competitive advantages. Today´s act of filling part of the channel is one more step in that direction.”

The entrance to the new channel is 1.6 kilometers long, 218 meters wide and 9.14 meters above sea level. It will take approximately three days to fill the area up to 12.5 meters of water and to reach the elevation of 21.64 feet above sea level, using 1.4 million cubic meters of water from Gatun Lake. “Beyond the technical aspects, this important project is also a testimony to the ability and commitment of the Canal workers in the development of a strategic initiative for the country,” added Alemán Zubieta. The rest of the new access channel is 6.1 kilometers long, and will be filled during 2013, once the 2.3-kilometer dam that separates this to the current channel is completed.

On August 16, 2010, the Panama Canal Authority awarded the Belgian company Jan De Nul nv, a contract for $54.5 million for the dry excavation and dredging of 3.8 million cubic meters of material in this area. To date, the Expansion Program shows a 30% advance on its different components such as dredging, dry excavation, design and construction of the new Locks. The Panama Canal has awarded contracts for more than $4.2 billion generating 19,000 direct jobs.