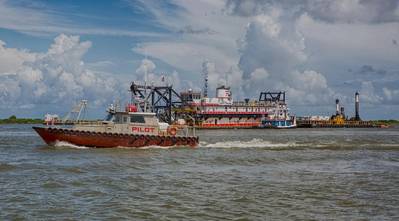 The U.S. Army Corps of Engineers (USACE) officially kicked off the project to deepen of the Mississippi River Ship Channel to 50 feet Friday, as Weeks Marine’s cutterhead dredge Captain Frank started dredging 5 miles above the Head of Passes.

The USACE awarded this first contract for the Ship Channel deepening to Weeks Marine on September 3, 2020, and the Captain Frank started the deepening Friday. The USACE awarded the second cutterhead dredge contract to Manson Construction on September 8, 2020. Manson’s cutterhead, the Robert M. White, is expected to begin deepening in late September. Three dredges – two cutterheads and one hopper dredge – will be utilized to deepen the channel in the first phase of the project.

The overall project will provide a draft of 50-feet from the Port of Baton Rouge to the Gulf of Mexico—more than 256 miles of the Mississippi River. Phase 1 of the project will provide a 50-foot channel from the Gulf of Mexico through Southwest Pass to Belmont Crossing and open up approximately 175 miles of the ship channel to the deeper draft. Phase 1 encompasses the entire jurisdiction of the Port of New Orleans, St. Bernard Port, Harbor and Terminal District, the Plaquemines Port, Harbor and Terminal District and the majority of the Port of South Louisiana.

“This start of this deepening project is a landmark day for our national maritime industry, and stakeholders in Louisiana and along the Mississippi River who collaboratively advocated for this national priority,” said Louisiana DOTD Secretary Dr. Shawn D. Wilson. “Our magnificent Mississippi River, that is the life blood of our state’s economy, will enable us to further expand global markets for farmers, manufacturers, and citizens that depend on imports and exports of goods for jobs and a quality of life.”

Colonel Stephen Murphy, Commander of the USACE New Orleans District, said,. “By deepening the Mississippi River Ship Channel even by just five feet (to 50-ft) the national economy will see benefits to the tune of approximately $127 million annually. With a benefit-to-cost ratio of 7.2-to-1, the project will pay for itself in two years.”

“Our members are excited about the start of the 50-foot deepening, as it will help our port partners become more competitive on a national and international basis as well as contribute to coastal restoration though beneficial use of dredged material,” said Captain Michael Miller, President of the Associated Branch Pilots (Bar Pilots) and Chairman of the Big River Coalition.

“The kickoff of this historic project is exciting for the entire maritime community,” said Brandy D. Christian, President and CEO of the Port of New Orleans. “It is the culmination of decades of hard work by all stakeholders involved from the Big River Coalition to Congress and the critical support of the State and the U.S. Army Corps. The deepening project will harness the economic power of the river and the most competitive global gateway in the Gulf of Mexico.”

“The Big River Coalition revitalized efforts to deepen the Mississippi River Ship Channel to 50 feet in August 2012,” said Sean Duffy, Executive Director of the Coalition. “The project will promote the economic advantages of waterborne commerce to shippers by extending the draw area for shipping down this economic superhighway. The deepened channel will offer increased cost savings to shippers and help the U.S. compete in world markets, enhance the system’s water carrying capacity and increase the flood protection of businesses, farms and homes. A deeper channel will create thousands of jobs and restore 1,500 acres of wetlands in the environmentally sensitive birds’-foot delta.”

The material dredged from the first 30 miles of the project near the mouth of the Mississippi River will restore an estimated 1,462 acres of critical marsh habitat.

The Executive Director of the Port of Plaquemines, Sandy Sanders, said, “The deepening of the Mississippi River Ship Channel to 50 feet is a momentous water infrastructure project that will promote increased trade throughout the nation’s interior. The Plaquemines Port Harbor and Terminal District along with our partners from Plaquemines Parish to the state of Illinois are thrilled to see the deepening project commence. The deeper draft will increase the efficiency of waterborne commerce by reducing transportation costs and extend the channel’s outreach to a larger share of American producers and consumers.”

The Executive Director of the Soy Transportation Coalition, Mike Steenhoek, said, “Our nation’s inland waterway system—including the Mississippi River Ship Channel—provides an efficient connection between farmers in the Midwest and customers around the world. As a result, any effort to improve the channel must not only be regarded as a Louisiana priority, but also a priority for the Midwestern states that feed into it.”

Shares in Dutch marine services provider Boskalis jumped on Wednesday, a day after the Suez Canal unveiled a project to expand…