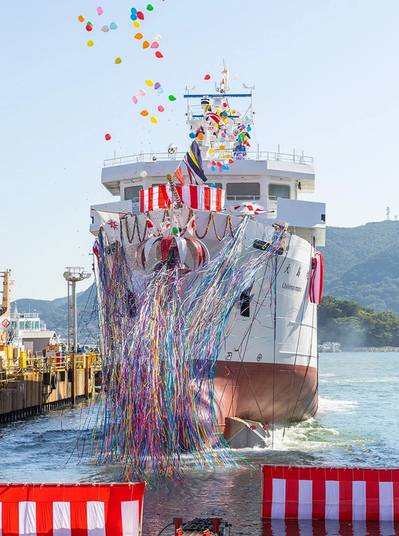 Delivery of the ship is scheduled for March 2023, following completion of interior work and sea trials. The new ship is designed to provide students with practical training in ocean navigation, as well as conducting surveys and experiments related to operations and the ocean.

Oshima Maru is the fourth-generation training vessel for the school, and the first new ship in 29 years. This is the second vessel Mitsubishi Shipbuilding has built for the school, following the third-generation training ship currently in operation. While its primary mission is a training ship, the vessel also has functions that allow it to serve as a support ship during disasters, such as supplying outboard water and electricity, transport of relief supplies and providing accommodations.

The ship is equipped with an electric propulsion system and lithium-ion batteries, which is expected to provide energy efficiency through parallel operation with the onboard generators, a reduced environmental load by running exclusively on batteries near shore, and a better living environment from reduced inboard noise and vibration.