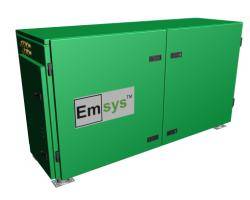 Hefty fines, detention and possible arrest are looming for ship owners/operators who fail to meet new ship emissions requirements. In accordance with MARPOL (Marine Pollution) Annex VI regulations, new Emissions Control Area (ECA) regulations for sea areas within 200 nautical miles from the coasts and ports of the U.S. and Canada go into effect on August 1, 2011. Even with an exemption clause that extends the regulations enforcement date to Aug. 1, 2012, the time window is short for outfitting thousands of vessels. Regulatory bodies are urging companies to put in place emissions measurement and control capabilities now.

The regulations are designed to limit sulfur oxides (SOx), nitrogen oxide (NOx) and particulate matter air pollution. Requirements for NOx emissions will affect most U.S. and foreign-flagged diesel-engine vessels of 400 gross tons constructed after Jan. 1, 2000. SOx limits are irrespective of a vessel’s age. Enforcement of MARPOL Annex VI will be carried out by the U.S. Coast Guard under EPA guidelines. Container, LNG and chemical product carriers and tank ships are among vessels that will be most impacted; more than 8,000 ships worldwide. Fines for vessels in violation could be in the tens of thousands of dollars.

With in two years, the new regulations could also include areas off the Hawaiian Islands, Baltic Sea, North Sea, France and in the Gulf of Mexico. WRSystems has been receiving inquiries worldwide about the Emsys™ technology.

“We developed Emsys™ in a proactive fashion to be a straight-forward and cost-effective solution for compliance,” says Dave Edwards, Senior Vice President and Director of WRSystems’ Engineering Services Division in Norfolk, Virginia, where the technology was developed. “Cost savings will be realized in black smoke fines and ship detention avoidance, as well as a reduction in engine maintenance expense, part replacement costs, fuel expense and reporting expense. The public relations value of improved environmental performance and green operating standards will also be of significant benefit.”

Emsys™ is a second generation quantum cascade laser and optics-driver single enclosure device that can continuously monitor emissions from up to 10 smokestacks for marine applications and is certified by the American Bureau of Shipping (ABS). WRSystems developed this integrated technology not only to assist industry to meet the MARPOL Annex VI requirements, but for other localized and international marine air pollution regulations. The system was formally launched at the SMM 2010 Exhibition in Hamburg to complete the commercial development phase of the project, which commenced in early 2009.

“The technology incorporated in the system is a significant leap forward over other systems currently available,” says Simon Brown, WRSystems’ Director of International Marine Business. “Emsys™ will set new standards in emissions reporting, and is also of additional and significant financial benefit if incorporated within vessel compliance management and operational efficiency programs.”

Emsys™ has been designed to meet the requirements of all current and future marine emissions regulations. A further enhancement to include Ammonia Slip (NH3) measurement within Selective Catalytic Reductions Systems (SCR) is planned for release subject to the finalization of IMO Guidelines in 2011. Extensive system assessment and testing by ABS has resulted in Emsys™ taking a significant technological lead over its competitors. The automated CO2 Operational Index Software module can simplify data collection and index generation while increasing the accuracy of reported data. The integral PM sensor allows reporting of particulate matter in various formats to provide compliance data for forthcoming ECAs and other localized regulations. The system utilizes a single PM sensor to measure specific emissions in g/kWh and mg/m3, removing the need for installation of sensors in each stack and eliminating the maintenance and cleaning requirements normally associated with this technology.

MARPOL Annex VI regulations compliance will be verified through shipboard documentation, equipment certification/approval and tests and examination. An International Air Pollution Prevention (IAPP) certificate and an Engine International Air Pollution Prevention (EIAPP) certificate will document compliance. Documentation deadlines can in no case be later than Jan. 8, 2012. Each certificate is valid for a maximum of five years. Vessels must be issued these certificates by the Coast Guard or Authorized Class Societies.

New diesel ship e ngines since January, 2011 have had to comply with MARPOL Annex VI Tier II standards, mandating a more efficient use of current engine technologies including engine timing, engine cooling and advanced computer controls resulting in a 15 to 25% reduction in NOx. In January, 2016 new ship engines will have to comply with Tier III standards, requiring usage of high efficiency emission control technology such as selective catalytic reduction to achieve NOx reductions of 80% below current standards.

The original MARPOL Convention was signed on 17 February 1973, but did not come into force. The current Convention is a combination of 1973 Convention and the 1978 Protocol. It entered into force on 2 October 1983. As of December, 2005, 136 countries, representing 98% of the world's shipping tonnage, are parties to the Convention. All ships flagged under countries that are signatories to MARPOL are subject to its requirements, regardless of where they sail, and member nations are responsible for vessels registered under their respective nationalities.