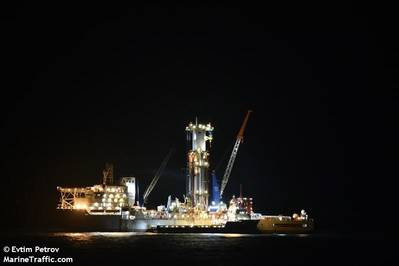 The U.S. Coast Guard said on Wednesday it is responding to a drillship that reportedly sustained damage as Hurricane Ida ripped through the Gulf of Mexico and into Louisiana as a Category 4 storm.

The agency said it was notified during the storm that the ultra-deepwater drillship Noble Globetrotter II had been damaged, and that it had been in touch with both the vessel's master and owner Noble Corporation since Sunday to gauge the extent of any damage and to ensure readiness of onboard lifesaving equipment.

The Liberian-flagged drillship and its 100-plus crew are currently located 80 nautical miles south, southeast of Grand Isle, La. The vessel's U.S. licensed master has maintained that the drillship was not in distress and is not actively taking on water, according to the Coast Guard. However, social media posts claiming to be from Noble Globetrotter II crew members have called attention to potential safety issues, including possible hull damage.

Noble Corp. said Sunday that all workers aboard three of its drillships in the U.S. Gulf of Mexico were safe and accounted for following the storm.

"Each rig [Pacific Sharav, Noble Globetrotter I and Noble Globetrotter II] successfully secured its respective well in progress and took evasive actions to avoid the storm's path. Of the three, the Noble Globetrotter II is the only vessel that encountered hurricane-force conditions," Noble Corp. said. "The vessel maintained stability throughout the weather event and is operating on its own power with functional marine and safety systems. A full assessment of its condition will be completed as soon as the weather clears."

Crew members have told local media that Noble Corporation and Shell, who Noble is under contract with, were supposed to evacuate them before the storm hit but never did. The workers said they rode out 80-foot seas and 150-mile-per-hour winds.

Oil and gas firms on Sunday had suspended 1.74 million barrels per day of oil production in the U.S. Gulf of Mexico, according to the Bureau of Safety and Environmental Enforcement (BSEE).

BSEE said that personnel had been evacuated from a total of 288 production platforms, 51.43% of the 560 manned platforms in the Gulf of Mexico, that workers had been evacuated from 11 non-dynamically positioned rigs, and that 10 dynamically positioned rigs had moved off location out of the storm’s projected path as a precaution.