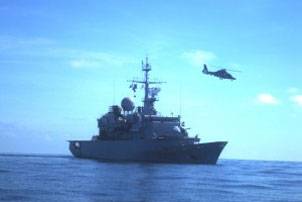 A helicopter from the EU NAVFOR warship FS Nivôse was launched against a pirate skiff leading to the disruption of a pirate attack against the merchant vessel Nordneptun off Zanzibar, Tanzania on the morning of 25 May.

EU NAVFOR continues to successfully patrol, intercept and disrupt pirate attacks throughout the EU NAVFOR area of operations. The French EU NAVFOR warship Nivôse responded immediately to a distress signal from Nordneptune, a tanker, which indicated she was under small arms attack from a pirate vessel. As a result of the application of ‘Best Management Practices ‘against pirate attack, the Nordneptune was able to evade the attack.

However, within an hour, the Nordneptune was under further more serious attack by two pirate skiffs. In the interim, EU NAVFOR warship FS Nivôse closed with Nordneptun and was now in a position to launch her helicopter. On arrival, Nivôse helicopter fired warning shots and both skiffs gave up their attack and moved into Tanzanian territorial waters where the Tanzanian Coast Guard was alerted to continue the pursuit.