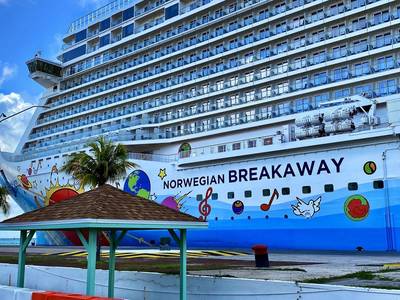 A probable case of the Omicron variant has been identified in a crew member of a Norwegian Cruise ship that reached New Orleans on Sunday after detecting COVID-19 among some crew and guests, the Louisiana Department of Health said.

The probable case was found among 10 people who tested positive for the virus on Saturday, the health agency said in a tweet on Sunday.

Another seven cases have since been reported, it added, taking the total number of cases among passengers and crew of Norwegian Breakaway, a cruise ship owned by Norwegian Cruise Line Holdings Ltd (NCL), to 17.

"At this time, there have been no changes to scheduled future sailings on Norwegian Breakaway," a spokesperson for Norwegian Cruise Line said in a statement to Reuters.

The cruise ship departed New Orleans on a week-long cruise on November 28 and had stops in Belize, Honduras and Mexico, the health agency said.

"NCL has been adhering to appropriate quarantine and isolation protocols," the department said in an earlier tweet.

Everyone on board will be tested for COVID-19 before leaving and will be provided with post-exposure and quarantine public health guidance by the U.S. Centers for Disease Control and Prevention (CDC).