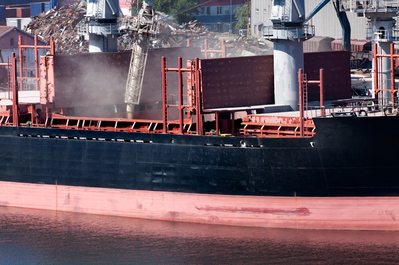 Moscow said on Thursday that sanctions on Russia would have to be reviewed if it were to heed a U.N. appeal to open access to Ukraine's Black Sea ports so that grain could be exported, according to an Interfax news agency report. Read full story

Ukraine, one of the world's biggest grain producers, used to export most of its goods through its seaports, but since Russia sent troops into Ukraine, it has been forced to export by train or via its small Danube River ports.

U.N. food chief David Beasley appealed on Wednesday to Russian President Vladimir Putin, saying: "If you have any heart at all, please open these ports."

Beasley's World Food Programme feeds some 125 million people and buys 50% of its grain from Ukraine.

Interfax quoted Russian Deputy Foreign Minister Andrei Rudenko as saying: "You have to not only appeal to the Russian Federation but also look deeply at the whole complex of reasons that caused the current food crisis and, in the first instance, these are the sanctions that have been imposed against Russia by the U.S. and the EU that interfere with normal free trade, encompassing food products including wheat, fertilisers and others."

Russia's decision to send its troops into Ukraine almost three months ago has prevented Ukraine from using its main ports on the Black and Azov seas, and cut its grain exports this month by more than half compared to a year ago.

Russia and Ukraine together account for nearly a third of global wheat supplies. Ukraine is also a major exporter of corn, barley, sunflower oil and rapeseed oil, while Russia and Belarus - which has backed Moscow in its intervention in Ukraine and is also under sanctions - account for more than 40% of global exports of the crop nutrient potash.