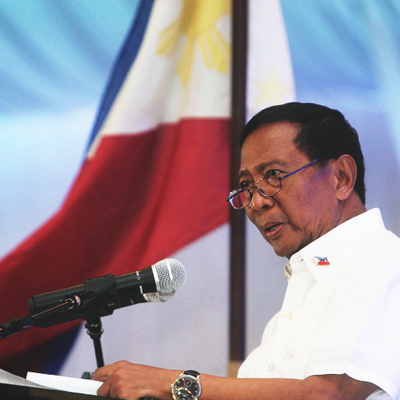 Philippine Vice President Jejomar Binay, considered a front-runner for the presidency in 2016, said on Thursday he would welcome a joint venture with China to explore for oil and gas in disputed areas of the South China Sea.
Binay's stance is in contrast to President Benigno Aquino, who has opposed business partnerships with China in territory claimed by both countries.
China claims most of the potentially energy-rich South China Sea, and its recent rapid land reclamation around seven reefs in the Spratly archipelago has alarmed the Philippines, Vietnam and other claimants.
"Personally, my feeling is we will continue to insist (on) our sovereignty over those properties but at the same time we hope we can create a situation where we can improve bilateral relations with China," Binay told reporters during a visit to Jakarta to attend the Asia Africa summit.
"China has all the capital and we have the property so why don't we try and develop that property as a joint venture?" he added when asked about a joint partnership with China in oil and gas exploration.
The vice president also mentioned the possibility of revising the constitution in order to attract more foreign investment, if he is elected.
Binay, 72, was mayor of Manila's financial district for several terms from 1986, and has expressed his intention to run for president next year. He has topped all opinion polls on possible candidates, but his ratings have been falling since corruption allegations were raised against him in the Senate.
Political opponents said he had amassed billions of pesos from overpriced building contracts and services to poor families in the city, including birthday cakes for senior citizens.
Binay has rejected the allegations as "baseless".
(By Randy Fabi and Kanupriya Kapoor; Additional reporting by Manuel Mogato in Manila; Editing by Mark Trevelyan)