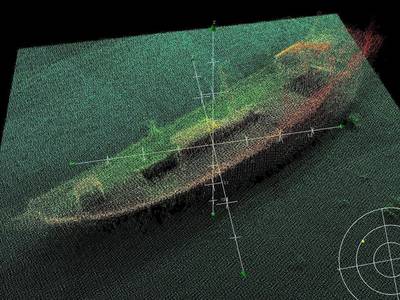 Making use of its new hi-tech, smaller motor launch, the Plymouth-based ship discovered two sunken dhows in one of the world's busiest ports at the beginning of a nine-month deployment.

Spitfire, the new survey motor boat, can be sent off independently to gather data at the same time as the mother ship - effectively doubling the ship's capacity to chart the seas.

After trials in the UK and around Souda Bay in Crete, the first real test of Spitfire came off Dubai with two days of surveying work in tandem with HMS Enterprise.
The net result from the duo's scanning using their multibeam sonars were the two previously undiscovered wrecks, each about 20 metres long and rising about five metres from the seabed of the harbour, produced in impressive 2D/3D graphic representations courtesy of the powerful computer systems and software aboard HMS Enterprise.

With the wrecks now surveyed, the data has been passed on to the Dubai Ports Authority and mariners have been alerted to the dhows' position.