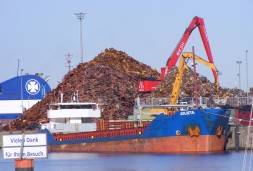 Preparations are in full swing throughout the port of Kiel for the oncoming winter period as the 2,050 GT, 88m long and 13 m wide cargo ship Julieta arrived with a load of 3,200 tons of gritting salt from Morocco.

The Julieta docked at Berth 9 in the Ostuferhafen and was unloaded there by the firm of Burmann. Two giant grabs were used which are capable of offloading up to 400 tons of rock salt an hour.

Hans-Martin Burmann said, “It is both economical as well as ecologically sound to transport bulk cargo like this by ship. In doing so we are making a practical contribution to getting traffic off the roads and onto ships at sea and we want to make this kind of transport solution a permanent one for the transport of gritting salt.”

Most of the salt cargo was loaded directly onto trucks for further transport to the surrounding region. When they enter the port, the empty trucks first cross a weighbridge before being loaded and weighed again when they leave. In this way volumes can be monitored and can also be checked directly and on-line by customers. Part of the Julieta cargo was also taken to the Ostuferhafen’s Warehouse No. 2 for temporary storage and filling into big bags for customers with small-quantity needs.

Hans-Martin Burmann, Managing Director of Burmann Hafenlogistik, said, “This is a premiere for Kiel. For the very first time large quantities of gritting salt are being shipped through the port.”

The Managing Director of the Port of Kiel (SEEHAFEN KIEL GmbH & Co. KG) Dr. Dirk Claus said, “The Port of Kiel recognizes the traditional and important role it plays in supplying the regional market. Our port is universal and can handle nearly every kind of bulk cargo.”

Burmann Hafenlogistik is involved in handling, among other things, grain, wood pellets, splitt, pig iron and also roundwoods in the port. Bulk cargo last year accounted for about 20% of all handling in Kiel. The main commodities in the sector were fuels and building materials as well as agricultural products.