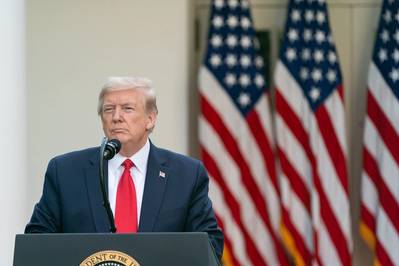 In recognition of National Maritime Day, held on May 22 each year, President Donald Trump issued a proclamation honoring the U.S. maritime industry. The full text is below.

Since the founding of our great Nation, we have relied on merchant mariners to deliver goods to market and strengthen our national security. On National Maritime Day, we recognize the United States Merchant Marine for all it does to facilitate our commerce and protect our interests at sea.

Our Nation’s merchant mariners enable peaceful trade with countries around the world and provide vital sealift support to our Armed Forces. Whether on the ocean or our inland waterways, merchant mariners support our economy by transporting billions of dollars of imported and exported goods. These men and women also sail bravely into combat zones to deliver supplies and weapons to our military men and women, playing a critical role in the success of their mission.

This year, as we celebrate the 75th anniversary of the end of World War II, we pay tribute to the United States merchant mariners who served as the “Fourth Arm of Defense” for our Nation during the war. Earlier this year, I was proud to sign into law long-overdue legislation to award the Congressional Gold Medal to the valiant civilian merchant mariners who maintained critical supply lines to our overseas troops and allies during the Second World War. Many of these mariners endured brutal attacks from German U-boats, and more than 6,000 of them perished at sea or were held as prisoners of war. This number includes 142 students of the United States Merchant Marine Academy — distinguishing it as the only one of the five service academies authorized to carry a battle standard.

As we remember the tremendous sacrifices of the World War II merchant mariners, we also continue to honor the present‑day citizen mariners who make up our Nation’s world‑class Merchant Marine. Today, we pay tribute to their expertise, patriotism, and dedication to serving our country and ensuring our national security.

The Congress, by a joint resolution approved May 20, 1933, has designated May 22 of each year as “National Maritime Day” to commemorate the first transoceanic voyage by a steamship in 1819 by the S.S. Savannah. By this resolution, the Congress has authorized and requested the President to issue annually a proclamation calling for its appropriate observance.

IN WITNESS WHEREOF, I have hereunto set my hand this twenty-first day of May, in the year of our Lord two thousand twenty, and of the Independence of the United States of America the two hundred and forty-fourth.