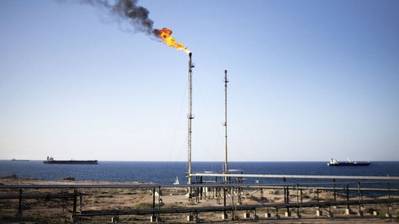 Libya's western Zawiya oil terminal has been closed by protesters preventing some oil product tankers from discharging, a government statement said on Friday.

Local citizens demonstrating against the General National Council, the country's parliament, have blocked the entrance to the port preventing oil workers from entering.

The connecting oilfield El Sharara and the pipeline itself have been blocked by other protest groups since March.