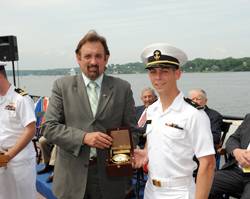 Northrop Grumman Corporation presented the second annual Elmer A. Sperry Junior Navigator of the Year Award to Ensign Jeffrey Iiams, USNA Class of 2010, in honor of the midshipman who demonstrated outstanding navigation skills and knowledge during the four years of professional development at the U.S. Naval Academy in Annapolis, Md.

The Elmer A. Sperry Junior Navigator of the Year Award was established by the company to honor Elmer A. Sperry, founder of Sperry Marine (now part of Northrop Grumman) in 1910. Sperry invented the first marine gyrocompass in 1908 and earned over 350 patents during his career in the maritime industry.

In ceremonies at the Robert Crown Sailing Center at the Naval Academy on May 21, Jeff Holloway, director of International & U.S. defense business development, marketing and sales for Northrop Grumman's Maritime Systems business unit, presented Ensign Iiams a Weems and Plath brass gimbal clock in a wooden case with his name inscribed as well as a congratulatory letter signed by Northrop Grumman Maritime Systems vice president, William B. Hannon. A number of midshipmen were also recognized for professional achievements during the ceremony which included various veterans, alumni, and the Naval Institute organizations.

"Midshipman Iiams was chosen for this prestigious recognition among his very highly competitive classmates after being recommended by the Naval Academy professional development staff and faculty," said Capt. Steven Conklin, director of the professional development division, U.S. Naval Academy. "He was the top student in his graduating class in all of his professional seamanship and navigation courses the past four years, to include superior performance in the classroom, during laboratory periods, and while operating the training evolutions in Naval Academy's yard patrol craft."

"Northrop Grumman Maritime Systems has enjoyed nearly a decade of close cooperation and support of the U.S. Naval Academy Foundation and Naval Academy in support of the professional development and training of midshipmen, The Elmer A. Sperry Junior Navigator of the Year Award is an extension of Northrop Grumman's close relationship with the U.S. Naval Academy," said Holloway, a 1977 Academy graduate and retired career naval officer. "Since 2001, our company has made gift-in-kind donations of more than $9 million of navigation software, specifically the Electronic Chart Display and Information System-Navy (ECDIS-N) - the only approved and certified electronic charting navigation software used by the U.S. Navy - as well as services and training to the U.S. Naval Academy Foundation. We highly value our relationship with the Academy and are proud to make of these donations to help ensure that graduating midshipmen have access to the latest state-of-the-art navigation technology in preparation for their impending naval service."