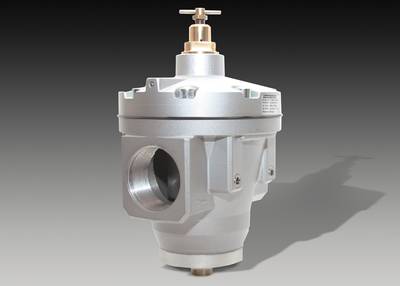 Tech Development (TDI) introduced its new TurboFlow Air Regulator which the company says improves air delivery to the start system. The TurboFlow Regulator combined with other TDI start system components provides matched air-flow to the turbine starter for improved reliability and system savings. “One of our marine customers was looking to get more than the three starts they were receiving from their air reservoir using (another) turbine starter,” said Dave Rawlins, Senior Product Manager at TDI. “We switched them to a TDI T515-I inertia-engaged start system with our new TurboFlow Air Regulator and they were able to get 9 starts at 50 psig.  This allowed them to re-classify their boat as an ocean going vessel and enabled them to gain additional value in terms of higher daily rates.”
TurboFlow Air Regulators are used on engine start systems in the marine, oil & gas, power generation, and mining industries and on specific engines including Caterpillar, Cummins, GE, GM, Ford, MAN, MTU, Waukesha, Wartsila, Yanmar and other large engine makes.  TurboFlow can also be applied as a part of plant air systems or in applications where both high and low pressure differentials exist.
A significant amount of an engine’s air is wasted because of the inability of the components in the system to flow as needed during the process. The TurboFlow Regulator minimizes dynamic air-flow loss and delivers the optimized air volume to the starter every time.
http://tdi-airstarter.com

(As published in the April 2014 edition of Maritime Reporter & Engineering News - http://magazines.marinelink.com/Magazines/MaritimeReporter)