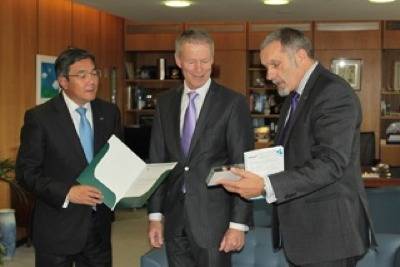 Sir Lockwood, New Zealand High Commissioner to the United Kingdom, recently presented his credentials to the IMO’s Secretary-General, Koji Sekimizu. The Director of Maritime New Zealand, Keith Manch, also participated in the first-ever Symposium on the 'Future of Ship Safety', held at IMO headquarters in London.

“New Zealand is reliant on international shipping for the vast majority of our imports, and to get our exports to market. We need to be confident about the quality of this shipping, in terms of safety, security and environmental standards,” he said. “Shipping is one of the most international of human endeavours, and no country can regulate it on its own. It’s important we have our say in shaping the international rules that apply.”

The two-day Symposium on the Future of Ship Safety preceded a meeting of the IMO’s Maritime Safety Committee and brought together the full spectrum of ship designers, builders, owners, operators and regulators. Sessions were focused on the challenges facing shipping if it is to meet the needs of society, industry and global trade, and whether the existing regulatory regime will be sufficient to respond to these challenges.