High Safety Requirements for Ships in the North-East Passage 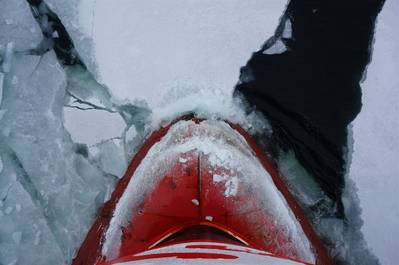 The Stena Polaris is one of the tankers in Stena Bulk’s fleet with the necessary technology, equipment and crew competence for a safe voyage via the Arctic.

The Russian authorities responsible for administering the North East Passage have exacting requirements on technology and equipment. Additionally, only during a few months every year does the ice situation allow ships to pass through the North-East Passage. Even then, they are escorted, often in convoys, through the most difficult sections and the Stena Polaris has been assisted by the Russian nuclear-powered icebreaker Taymyr with a crew of 110. Also, throughout the voyage there are so-called “ice advisors” on board Stena Polaris who are used to navigating in Arctic waters.

The Stena Polaris has been built to ice class 1 A specifications in accordance with Det Norske Veritas (DNV), which means that it is well equipped to sail in ice-covered waters where broken ice can be up to 0.8 m thick. In addition to an ice-strengthened hull, her rudder and propellers are technically adapted for operation in icy waters and her main engines have been modified to deliver greater power.

In order to raise competence on board still further, Stena has been collaborating for some years now with Russian Makarov State University in St. Petersburg, which specialises in navigation in icy waters. 25% of the officers on board Stena Bulk’s tankers are Russian, and most of them were educated and trained at Makarov.

Patrik Svahn, Manager Commercial Operations in Stena Bulk’s office in Gothenburg, is now on board the Stena Polaris and blogs directly from the ship.

”As always, Saturday is drill day and today was no exception. On the menu was a safety drill with helicopter launching, an abandon ship drill and again a fire drill but this time it was time for fire in the paint store. At 15:30 the alarm sounded and all crew and passengers went the to their respective muster station. We started off with the helicopter launch drill which today consisted of the 3rd Officer verbally going through the different scenarios where helicopter launching could be necessary such as during a medical emergency, so called helivac, and what to think of if this would come into reality. Past experiences were shared and those who had questions had the opportunity to ask them. Before we were finished with this drill the 3rd Officer advised that after the remaining drills we will all meet inside in the ships office where we will watch an educational movie about helicopter launching”.